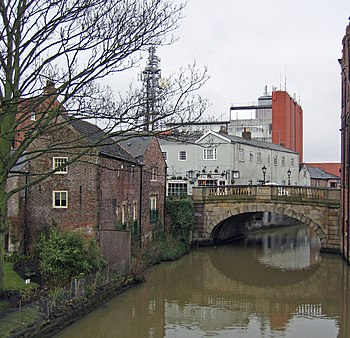 The River Foss at York

The River Foss is an improved river in the North Riding of Yorkshire, a tributary of the Yorkshire Ouse.

The Foss rises in the Foss Crooks Woods near Oulston reservoir close to the village of Yearsley. From here it runs south through the Vale of York to the Ouse. The name may come from the Roman word Fossa, meaning ditch (and the Romans had wharves here).[1] It is mentioned in the Domesday Book.[2]

The source of this river is a spring situated in the Howardian Hills adjacent to, and flowing into, Oulston Reservoir near Newburgh Priory, 4 miles north of Easingwold in the North Riding. From there to the Blue Bridge in York, where it joins the River Ouse, it is 19½ miles in length. For part of its way the B1363 between Brandsby and Stillington follows the river.

The river flows in a series of wide meanders in southerly direction for most of its course towards York.

The river is only navigable for a mile and a half upstream of Castle Mills Lock. The bridges by Peasholme Green and Foss Bank restrict the headroom to an air space of 7 feet 10 inches.

The Foss Barrier is built across the river near its mouth at Castle Mills. When closed, it prevents floodwater from the River Ouse flowing up the Foss and flooding parts of York. Water flowing down the Foss can be pumped over the top of the barrier and into the Ouse. Castle Mills Lock is 111 feet long and 20 feet wide. There are mooring points in the lock basin on the River Ouse side with overnight mooring on the River Foss prohibited. Beyond Rowntree Wharf there are few opportunities for turning.[3]

In 1069 William the Conqueror dammed the River Foss just south of York Castle, close to its confluence with the Ouse, in order to create a moat around the castle.[2] This caused the river to flood further upstream in what is now the Hungate and Layerthorpe areas, forming a large lake that was known as the "King's Pool" or the "King's Fish Pond" and which provided fish for the markets.[3] It was approximately 100 acres in size and fishing was only allowed by licence, except for the King's Men.[2]

The King's Pool was an integral part of the city's inner defences during the Middle Ages as the marsh was virtually impassable. This explains why there is no city wall between Layerthorpe Postern and the Red Tower.[3]

In the 17th century, the King's Pool and the Foss were in a state of decline because silt from upriver collected in the Pool, and not enough water came down to move it on, despite the main channel of the River Foss having been deepened in 1608.[2] Eventually the lake was too shallow to remain viable as a defence of the city. In 1644 the lake was shallow enough for Parliamentarian forces under Sir Thomas Fairfax to consider crossing it on foot as a way of breaking the Siege of York during the English Civil War.[3]

In 1727 an order was placed upon Arthur Ingram, 6th Viscount of Irvine to scour the River Foss from the Castle Mills to Foss Bridge, making it eight yards wide at the top and four yards at the bottom, and, in 1731 the Little Foss, an extension to enclose the Castle, was also drained.[2] In the 18th century, the water was so low that marshy islands were created (hence the area's modern name of Foss Islands). Citizens used the river as a rubbish tip which became a health hazard. Acts of Parliament in 1793 and 1801 were enacted to make the Foss navigable[2] and they effectively saw the end of the King's Pool. The Foss Navigation Company canalised the river from 1778,[2] in order to make it navigable as far as Sheriff Hutton.[3]

The York Drainage and Sanitary Improvement Act of 1853 meant that the York Corporation purchased the River Foss from the Foss Navigation Company. In 1859, the York Improvement Act was passed that saw the river above Yearsley Bridge abandoned as a waterway[2]

Stillington Hall is a mansion on the west side of the Foss and adjoining the village of the same name. It was the home of the Croft family, who are descended from a common ancestor with the house of Croft, of Croft Castle in Herefordshire.[2]

Remains of Roman jetties, wharves and warehouses have been found by excavations and building works on the banks of the Foss, suggesting that water-borne transport and trade was important from early in the history of the city.[4]

The modern Foss benefits most from leisure activity and several Long Distance Walks cross its path. The Foss Walk follows much of the river course from Blue Bridge to Oulston Reservoir and then on to Easingwold, a distance of 28 miles.[5] Part of the Howardian Way[6] near Yearsley and both the Ebor Way[7] and Centenary Way[8] as far as West Lilling also follow the Foss for part of their way.

Several species of fish can be found in the river, such as pike, dace, chub, gudgeon, Perch and roach. At the start of the century, Barbel have been introduced into the river.[9]

There are many small streams that feed into the Foss north of Strensall. The main ones are:

North to south, to the river's meeting with the Ouse, the villages and towns on the course of the river are: