The River Colne near Colchester

The River Colne is a small river that runs through Colchester in Essex and ultimately forms into a broad estuary that opens into the North Sea near Brightlingsea.

The Colne's two main tributaries start near the villages of Stambourne Green and Birdbrook in Essex. These converge in Great Yeldham, and then flow through Sible Hedingham, Halstead, Earls Colne, Colne Engaine, White Colne, Chappel and Ford Street before reaching Colchester. 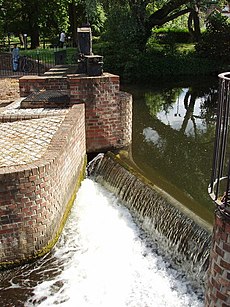 Middlemill weir, in the centre of Colchester

The Colne Valley has a flood plain which spans approximately 300 yards by the time it enters Colchester. This area is used as pasture, as the river at this stage has no safeguards against its rising the two feet it needs to burst its banks, although it is split between two pasture areas in Spring Lane, Old Lexden.

Roughly to the south of Colchester North Station, the river passes under a bridge and into a concrete-lined area that was used as an open-air bathing facility until the 1970s, and is now used by canoeists.

The river below the abandoned bathing place meanders under a road bridge at the bottom of North Hill, and tumbles down a weir used for discharge control at Middlemill, the site of a now-demolished mill. It forms the border of Colchester's Castle Park and the cricket ground, and footbridges cross it to provide access from the town centre to residential areas on the north side of the flood plain, which occasionally floods should the river rise too much. The river encircles one side of a small lake, and then turns southeast, and then south, before falling over a large weir and becoming tidal.

The tidal river is flanked by broad mudbanks at low tide, and flows through the Hythe, past the campus of the University of Essex, and then through the villages of Rowhedge and Wivenhoe past the tidal barrier and down to Brightlingsea. Downstream from the barrier, the Colne is marked by navigation buoys.

The Colne opens into the sea on the north side of the broad estuary of the Blackwater.

Sights along the river

Route 51 between Colchester and Wivenhoe

From Castle Park to Wivenhoe Railway Station, National Cycle Network Route 51 roughly follows the course of the Colne. This is a mixture of tarmac-surfaced shared-use paths, a short tarmac/gravel-surfaced area and, once out of the urban area of Colchester, a beaten path on the north levee of the river that passes the Hythe and the university all the way to Wivenhoe.

The Hythe area of Colchester, through which the Colne flows, was, from Roman times, a small port that supplied the town. However, the river is no longer deep enough to support ships large enough to make this viable, and water trade is now non-existent. Victorian-era plans to dredge the river once more ultimately failed.