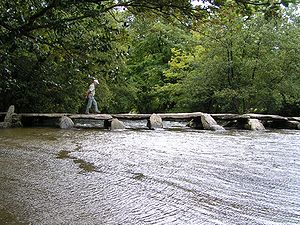 The Tarr Steps on the River Barle

The River Barle runs for seven miles through Somerset, before joining the River Exe at the county's border with Devon.

The river rises on the Chains on northern Exmoor, in Somerset above Simonsbath. On its upper reaches is a three-acre reservoir known as Pinkery Pond, formed by damming the River Barle: the pond was created the 19th century by John Knight and his son, and was originally intended to be of seven acres. The purpose is unknown but close to the pond are the remains of a small canal,[1] apparently dug to serve the Wheal Eliza Mine, an unsuccessful copper and iron mine on the river near Simonsbath.

From its source, the river it carves a valley through the hills, the Barle Valley, which is designated as 'biological Site of Special Scientific Interest'.

The river passes under a late-mediæval six-arch stone Landacre Bridge in Withypool,[2] and the Tarr Steps a clapper bridge reckoned either to be mediæval or prehistoric. The stone slabs weigh up to 5 tons apiece. According to local legend, they were placed by the devil to win a bet. The bridge is 180 feet long and has 17 spans.[3] It has been designated by English Heritage as a grade I listed structure.[4] In Dulverton the river is crossed by the Barle Bridge.

The Barle meets the Exe below Dulverton, at the Devon border just north of Exebridge.

The river flows through the Somerset Wildlife Trust's Mounsey Wood Nature Reserve and Knaplock and North Barton SSSI notified in 1954. The site is within Exmoor National Park.

The Barle Valley contains extensive tracts of ancient upland sessile oak ancient woodland which exhibit variations in structure and species composition as a result of difference in past management, geology and topography. The diversity of the site is increased substantially by areas of valley mire, heathland and acid grassland. Eighty-five woodland vascular plant species have been recorded including thirty one ancient woodland indicators from a single compartment. The meadows are one of the few sites for great burnet on Exmoor.

Springs emerging from the base of sandstone slopes generate nutrient poor acid mires dominated by Sphagnum and Polytrichum moss carpets. The lichen flora is exceptional both for its luxuriance and in the number of rare species. One hundred and sixty five taxa of epiphytic lichens are present containing a remarkably large proportion of ancient woodland indicators giving the Barle a very high index of ecological continuity.

The site contains an outstanding assemblage of woodland breeding birds including particularly high densities of wood warbler, redstart and pied flycatcher. The River Barle provides an important habitat for kingfisher, dipper and grey wagtail, while scrub and heath have breeding stonechat and whinchat. Twenty species of butterfly have been recorded in the valley including the nationally scarce marsh fritillary and nationally vulnerable high brown fritillary. Both roe deer and red deer graze areas of wood pasture.

The presence of otters in the Barle has been regularly recorded. A colony of dormice inhabits at least one of the hazel coppices.[5] 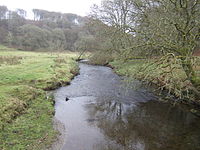 Salmon and trout are regularly fished from the Barle.[6]

For much of its route the river's banks are the path of the Two Moors Way footpath.[7]

The upper reaches of the Barle produced favourable rapids which appeal to whitewater kayakers. The rapids are Graded at 2 (3-) which beginner to intermediate kayakers and canoeists paddle.[8][9]