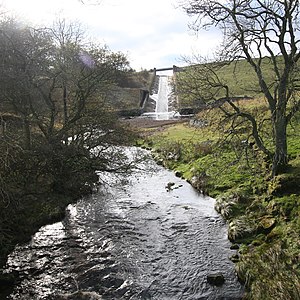 The Balder emerges from the Hury Reservoir

The Balder is a river on the eastern slope of Stainmore Common in the Pennines, and within the North Riding of Yorkshire and flows eastwards for about 13 miles to the River Tees at Cotherstone.

The head of the valley is a bleak moorland, with hills around it exceeding 1,640 feet.

The River Balder enters Balderhead Reservoir about four miles from the source, at around 1,080 feet. It spills into two more reservoirs further down Baldersdale: Blackton Reservoir and Hury Reservoir.

The scenery becomes gentler as it descends past Baldersdale Youth Hostel. The distinctive flat peak of Goldsborough to the south is passed before the valley begins to open out as the river enters Blackton Reservoir at around 920 feet.

The course of the valley carries on at a virtually exactly east direction as the River Balder enters Hury Reservoir at about 850 feet, passing the village of Hury which lies to the north.

The river now begins to twist and turn and is crossed by the Balder Railway Viaduct, which was used by the Barnard Castle to Middleton-in-Teesdale railway line before it was closed.

It finally joins the River Tees at Cotherstone, at a height of about 520 feet.