Reading Abbey is a large, ruined abbey in the town centre of Reading, in Berkshire. ‘The Abbey of Reading, dedicated to the Virgin and St John the Evangelist’ was founded by Henry I in 1121 as "for the salvation of my soul, and the souls of King William, my father, and of King William, my brother, and Queen Maud, my wife, and all my ancestors and successors".[1]

The abbey was founded by Henry I in 1121. As part of his endowments, he gave the abbey his lands within Reading, along with land at Cholsey. He also arranged for further land in Reading, previously given to Battle Abbey by William the Conqueror, to be transferred to Reading Abbey, in return for some of his land at Appledram in Sussex.[2]

Following its royal foundation, the abbey was established by a party of monks from Cluny Abbey in Burgundy, together with monks from the Cluniac priory of St Pancras at Lewes in Sussex. The abbey was dedicated to the Virgin Mary and St John the Evangelist.[3] The first abbot, in 1123, was Hugh of Amiens[4] who became Archbishop of Rouen and was buried in Rouen Cathedral.

According to the twelfth century chronicler William of Malmesbury, the abbey was built on a gravel spur "between the rivers Kennet and Thames, on a spot calculated for the reception of almost all who might have occasion to travel to the more populous cities of England". The adjacent rivers provided convenient transport, and the abbey established wharves on the River Kennet. The Kennet also provided power for the abbey water mills, most of which were established on the Holy Brook, a channel of the Kennet of uncertain origin.[1] 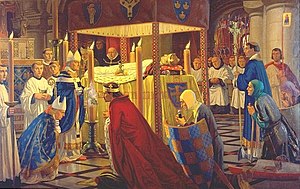 When Henry I died in Lyons-la-Forêt, Normandy in 1135 his body was returned to Reading, and was buried in the front of the altar of the then incomplete abbey. Other royal persons buried in the abbey include parts of Henry's firast queen, Matilda of Scotland, William of Poitiers, and Constance of York.

Because of its royal patronage, the abbey was one of the pilgrimage centres of mediæval England, and one of its richest and most important religious houses, with possessions as far away as Herefordshire and Scotland. The abbey also held over 230 relics including the alleged hand St James.[5] A shrivelled human hand was found in the ruins during demolition work in 1786 and is now in St Peter's Roman Cattholic Church in Marlow.[6]

The song Sumer is icumen in, which was first written down in the abbey about 1240, is the earliest known four part harmony from Britain. The original document is held in the British Library.[7]

Reading Abbey was frequently visited by kings and others, most especially by Henry III who often visited three or four times a year staying several weeks on each visit. It also hosted important state events, including the meeting between Henry II and the Patriarch of Jerusalem in 1185, the weddings of John of Gaunt in 1359 and Edward IV in 1464, and a meeting of Parliament in 1453.[8]

The abbey was largely destroyed in 1538 during Henry VIII's Dissolution of the Monasteries. The last abbot, Hugh Cook Faringdon, was subsequently tried and convicted of high treason and hanged, drawn and quartered in front of the Abbey Church. After this, the buildings of the abbey were extensively robbed, with lead, glass and facing stones removed for reuse elsewhere.[1]

Some twenty years after the dissolution, Reading town council created a new town hall by inserting an upper floor into the former refectory of the hospitium of the abbey. The lower floor of this building continued to be used by Reading School, as it had been since 1486. For the next 200 years, the old monastic building continued to serve as Reading's town hall, but by the 18th century it was suffering from structural weakness. Between 1785 and 1786, the old hall was dismantled and replaced on the same site by the first of several phases of building that were to make up today's Reading Town Hall.[9][10]

The interior of the ruined chapter house

The inner rubble cores of the walls of the many of the major buildings of the abbey still stand. The only parts of the Abbey Church that still exist are fragments of the piers of the central tower, together with parts of transepts, especially the south transept. In a range to the south of this transept are, in order, the remains of the vestry, the chapter house, the infirmary passage and the basement of the dorter or monks dormitory. The best preserved of these ruins are those of the chapter house, which is apsidal and has a triple entrance and three great windows above. To the west of this range, the site of the cloister is laid out as a private garden. The ruins are listed. 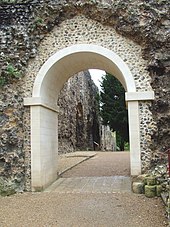 Restoration of an arch done in 2004

The ruins have been repaired and maintained in a piecemeal fashion leading to their deterioration.[16] In April 2008, the cloister arch, chapter house and treasury were closed to the public.[17] Repair work began in March 2009 and was expected to take only a few weeks[18] but the entire site was instead closed in May 2009 due to the risk of falling masonry.[19]

In late 2010, Reading Borough Council was reported as estimating that the ruins could cost £3m to repair, but it was also stated that the extent of the damage is yet to be determined. A survey was carried out in October 2010, using three-dimensional scans to build up a detailed view of each elevation, thus helping to identify the extent of the conservation required.[20] In April 2011 plans for an £8m revamp were unveiled, with the aim to create an Abbey Quarter cultural area in Reading. Reading Borough Council will spend £850,000 and will make a lottery funding bid for the rest. Work on site could start in mid-2013.[21]

The Abbey's Inner Gateway also known as the Abbey Gateway adjoins Reading's Crown Court and Forbury Gardens. The Inner Gateway is one of only two buildings that survived the dissolution, the other being the Hospitium. The Inner Gateway marked the division between the area open to the public and the section accessible only to monks.[22] The abbot used the gateway as a meeting area.[23] Hugh Cook Faringdon, the last abbot of Reading was hanged, drawn, and quartered outside the Abbey Gateway in 1539.[23]

In the late 18th century, it housed the Abbey School for Girls, which was attended by novelist Jane Austen.[22][24] It was Victorian restoration|heavily restored by Sir George Gilbert Scott, after a partial collapse during a storm in 1861.[22][24][25] The Abbey Gateway is Grade I listed building.[26][25]

In February 2010 the Gateway was temporarily closed and fencing erected when some of the decorative stonework came loose and fell into the street.[27][28] 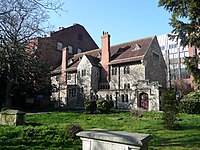 The abbey's hospitium, or dormitory for pilgrims, also survives. Known as the Hospitium of St. John and founded in 1189, the surviving building is the main building of a larger range of buildings that could accommodate 400 people. Much of the remainder of this range of buildings was located where Reading Town Hall now stands.[29]

The abbey school, which was founded in 1125, moved into the hospitium in 1485 as the Royal Grammar School of King Henry VII. The abbey school still survives in the form of Reading School, a state grammar school, albeit in different buildings on a different site.

About 100 years after the abbey school occupied the hospitium, and after the dissolution of the monasteries, Reading town council created a new town hall by inserting an upper floor into the hospitium's refectory, leaving the lower floor to be used by the school. This was the home of the town's administration for about 200 years, but the old refectory building eventually became structurally unsound. Between 1785 and 1786, the refectory building was dismantled and replaced on the same site by the first of several phases of building that were to make up today's Town Hall.[9][10][29]

The main building of the hospitium survived this demolition, and after various other uses, has now been incorporated into an office development, and is occupied by a children's nursery.[29] 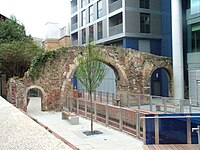 Abbey Mill across the Holy Brook

The ruins of Reading Abbey have a history of live performance. From early impromptu artist-led events, the site has established a history of open-air theatre.

In the late 1980s, the food art and performance collective 'La Grande Bouche' organised a cabaret under marquee in the ruins. The evening offered music and performance acts combined with food, much of which cooked by contributing performers.

In 1994, a large scale performance event 'From the Ruins'[32] was held in the abbey ruins, the finale event for the 'Art in Reading' (AIR) festival, funded in part by Reading Borough Council. This was organised by and featured a large number of artists and performers living or working in Reading,[33] and combined specially created music, dance, paintings, poetry and culminated in a spectacular evening performance involving large scale puppetry and pyrotechnics loosely based upon the history of Reading Abbey from the foundation by William I through the rise of the merchant classes to the dissolution and eventual sacking of the Abbey under Henry VIII.

Because of the current access limitations, the 2009 and 2010 Open Air Festivals could not be held.