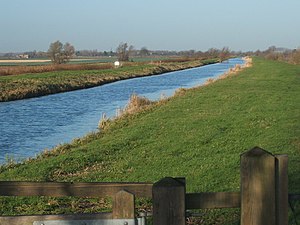 Reach Lode is one of the Cambridgeshire lodes, a man-made channel of ancient origin. It joins the River Cam at Upware, 2½ miles below Swaffham Bulbeck Lode, and runs for 3 miles to the fen-edge village of Reach.

From Reach, a defensive rampart and ditch, called the Devil's Dyke, runs for a further 7½ miles in a straight line to Ditton Green at the edge of the hills. The ditch is around 15 feet deep and the rampart some 18 feet high.[1] It was built in the Anglo-Saxon period and once ran from the edge of the fen at Reach; it still begins in the village.

The village of Reach has been a trading port since Roman times. From the 13th century, a fair was held there, and it was at this time that the last 300 yards of the Devils Dyke were levelled. Wharves and basins were developed, and coasters brought a wide variety of products to Reach and to the fair.

The coasters stopped when Denver Sluice was built on the Great Ouse, but smaller vessels continued to trade in agricultural produce, timber and the local chalk clunch used for building material, which were exported through King's Lynn, while incoming trade included building materials, stone, salts, wines and spirits. A lock was built at the start of the lode in 1821, as a result of the passing of the Eau Brink Act, while the South Level Commissioners took over responsibility for the waterway in 1827. Trade declined rapidly after railways reached the area in the 1850s, but some carriers continued to operate, with the last load of 525 tons of clunch being shipped in the early 1930s, and some peat being carried for a few years after that.[2]

Upware Lock, at 50 feet by 13½ feet, used to restrict the size of boats that could use the lode, and boats longer than 45 feet could not be turned at Reach.[1] However, the mitre gates at the downstream end have been replaced by a guillotine gate, enabling boats up to 63 feet to gain access, and turning at Reach with a 58-feet boat is possible. The lode is quite deep, for the surrounding land has sunk as the peat soils have dried out, and raising of the banks has resulted in the water being up to 10 feet deep in places. In 2007 the Environment Agency considered options for lowering the level of Reach Load and possibly some of the other lodes, as a way to reduce the maintenance of the banks. The report concluded that maintaining them at their present level was still the best solution, and a policy of strengthening the embankments was adopted as the way to limit the risk of major repairs being needed in the future.[3]