Ramsey is a small market town in Huntingdonshire, lying in the fenland north of Huntingdon and St Ives. The High Street is a busy, narrow street of shops, but the town opens out in Great Whyte, a very broad street reaching from the High Street out toward the fen edge and which has become the principal street. 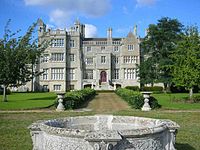 The town was the site of a wealthy abbey from Anglo-Saxon days until the Reformation. The town's manor house, still known as "Ramsey Abbey" is built on the site of the old Abbey and of material from the abbey. It is the seat of the Lords de Ramsey, one of the major landowners in Lincolnshire and Huntingdonshire. The remains of the Abbey are now home to part of the town's secondary school, Abbey College.

The town itself is on ground below sea level. The wider parish includes a number of villages, hamlets and farmsteads across the fenland, of which the highest place is Ramsey Heights, at sea level.

Ramsey Rural Museum, on Wood Lane, is housed in 17th century farm buildings and is a small museum dedicated to the history of rural Fenland life.[1]

Ramsey Heights is a hamlet lying west of Ramsey and on the lane between Upwood and Ramsey St Mary's. It is the highest place in the Parish of Ramsey; it is at sea level.

Ramsey Mereside is a hamlet lying due north of Ramsey on the road to Pondersbridge, lying on the south bank of the Forty Foot Drain near the loop of the River Nene Old Course, on the B1096 toward Benwick.

Ramsey St Mary's is a hamlet lying north-west of Ramsey, due north of Ramsey Heights. It is along the B1040, the road out from Great Whyte into the fen.

St Mary's, the church serving the hamlet was built in the nineteenth century when it was realised in the 1850s that population of Ramsey was swiftly outgrowing the capacity of the parish church, St Thomas of Canterbury. This increase was in part due to a large number of settlers, who had moved onto reclaimed land when Whittlesey, Trundle and Ugg Meres were drained. It was also to serve the scattered farms across the fen. The church was founded in 1858 by Mrs Emma Fellowes, widow of William Henry Fellowes of Ramsey Abbey and was opened in 1859.

The church is an elegant Victorian church in the Early Decorated/Gothic style, with yellow brick and facings of stone. It stands on a vaulted foundation supported by a large number of long bog oak piles, which were driven through peat and soft clay down to a level of hard clay by pile driver, the weight for which was left in the corner of the churchyard for many years. Between 1997 and 2000 renovations were carried out on the building and surroundings.The work was funded by the villagers of Ramsey St. Mary’s and Ramsey Heights, with grants from the Heritage Lottery Fund, the Millennium Commission, and others

Ramsey of old lay in the fenland, an island amidst the marsh, connected by causeways and lode to nearby villages. It is only in the Modern Period that the fens were drained and today’s rich farmland appeared.

The first we know of Anglo-Saxon ‘’Hramsieg’’ concerns its Benedictine abbey, founded in the tenth century. Its remains have been uncovered by archaeologists, providing evidence for activity associated with the pre-Conquest monastery. Tradition has it that Ælwyn, foster brother of King Edgar I, founded a hermitage at Ramsey. It received a series of substantial grants of land by King Edgar who confirmed all the privileges in 975. The abbey experienced the transition to Norman rule without difficulty and in the eleventh century it witnessed a period of rebuilding. During the thirteenth and fourteenth century the house had a succession of wealthy abbots who embarked on a series of costly building programmes. The Black Death of the fourteenth century ended its prosperity and by the end of the century the house was financially decayed. The abbey recovered over the following years and throve until its dissolution in 1539.

The early history of the town is obscure. Ramsey is not mentioned in the Domesday Book of 1086, perhaps because it was part of Bury or because it belonged to the abbey which enjoyed royal privileges.

Throughout the Middle Ages, Ramsey remained a small market town serving the abbey and never developed into a borough. The original settlement probably developed outside the abbey, along Hollow Lane. By 1200 the town had grown sufficiently to obtain a weekly market held at the junction of High Street with the Great Whyte and, later, an annual fair held at the green by the church. During the mediæval period the Great Whyte was a navigable canal that ran through the present road. It was culverted around the middle of the nineteenth century.

The mediæval economy of the town was dominated by garden produce, the cloth trade and alehouse keeping. Fisheries also played an important part in the fen economy, together with livestock. Throughout the Middle Ages the waterways of the fenland formed commercial and transport avenues that ran through the hearth of the region. Enclosure was piecemeal and prompted by the abbey.

A weekly market was probably held by 1200. The grant was confirmed by King Henry III in 1267 who also granted a fair on the vigil and feast of the Translation of St Benedict and for two days following. The bulk of the trade was dominated by garden produce.

The abbey cartulary contains references to detailed arrangements concerning the granting of fisheries and fishing rights around Ramsey Mere and Whittlesey Mere, suggesting the importance of fisheries. Rents were often paid in eels.

Cattle were razed where the ground permitted and parts of the fen were reclaimed for both arable and pasture throughout the Middle Ages and later periods. Meadow and pasture were regulated by common rights. There are accounts of disputes between the major abbeys of Ramsey, Thorney and Ely about profits and limits of their commons.

Among the occupations there were weavers and fullers with others who were connected with the cloth trade. There were also tanners. The most prosperous trade was that of alehouse-keeping which suggests that Ramsey had facilities for travellers.

At the dissolution of the abbey in 1539 the site of the monastery, its land and associated granges at Bodsey and Biggin were given to Richard Williams, alias Cromwell who dismantled the buildings and sold the material. The properties remained with the Williams / Cromwell family until 1676.

Following the dispersal of the estates of the abbey into lay hands in the second half of the sixteenth century enclosure at Ramsey and neighbouring parishes gathered momentum. Systematic drainage of the Great Level from the seventeenth century increased the area for hay and pasture which was progressively divided and allotted. The parish was finally enclosed by official Act of Parliament in 1801.

Properties along the Great Whyte appear to represent secondary (post-mediæval) development of the settlement. Archaeological excavations have shown that this area was wet during the mediæval period due to the presence of the fen. A fire occurred at Little Whyte in 1636 which destroyed some 15 tenements. A second fire in 1731 destroyed a great part of the High Street.

The market had lost its prominence in the 18th century to St Ives, and by 1881 'St Ives has drained our market of cattle, and only a few pigs are now its staple', and survived as a pleasure market selling trinkets.

The canal of Great Whyte was culverted around the middle of the nineteenth century to create the broad road of today. By the time of the estate map, the village had expanded along the Great Whyte and along the western end of the High Street by progressive infilling of plots. Later editions of the OS Maps up to the 1970s present a similar picture. Since the 1970s progressive increase in the size of the population has prompted development around the town and along Bury Road. The limits of the town of Ramsey and the village of Bury to the south are not clearly defined, with modern housing estates spreading across the urban boundary.

The parish church of St Thomas of Canterbury (Thomas Becket) was built around 1180-90 as a hospital, infirmary or guesthouse of the abbey. It was originally an aisled hall with a chapel at the east end with a vestry on the north side and the warden's lodgings on the south, but both these have been demolished. The building became the parish church in perhaps 1222.

The church's very small chancel and the long nave, and the absence of a tower from the original church, suggested to the investigators of the Royal Commission on Historical Monuments that the building was designed as a hospital, infirmary or guest house.

Each year over the August Bank Holiday weekend, the town is home to Ramsey 1940s Weekend, one of Britain's biggest living history events. The main event is held at nearby RAF Upwood, dedicated to recreating the sights and sounds of the 1940s and is held in aid of several local charities, resulting in it being rewarded with a tourism award. The event features living history re-enactors, period dancing, food, exhibitions and trade stands.