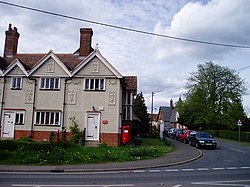 Radwinter is a village and a parish on the B1053 road in Essex. The population in the 2011 Census was 612[1] with 306 males and 306 females living in the parish.[2] Radwinter has a 14th-century church in the centre dedicated to St Mary the Virgin[3] and a primary school.[4] The village has four outlying hamlets in between the market town of Saffron Walden and Haverhill.[5]

In the 1870s Radwinter was described as:

There is much local history of the parish dating back to the 1800s. "The parishwas once divided into Great Radwinter and Little Radwinter however this distinction is now lost".[7] There was also four manors in existence, Radwinter Hall, Brockhold's, Bendish Hall and Radwinter Grange. Most of what can be seen today in the centre of Radwinter is the work of the Bullock family, they were Lords of the Manor and rectors or Radwinter.[8]

With a small population of 612 the village is small and closely connected. In Radwinter there are approximately 250 houses. Many of the old houses and cottages date back to the Tudor times, built from oak timbers from the surrounding woodland areas. Other houses are older and have been altered as time passes and other houses were built more recently such as the 20th- and 21st-century houses seen around Radwinter.[9] The community centres around the parish church and post office but also has a village hall, a local primary school, a sport and recreation ground and a local public house and restaurant, The Plough Inn. The village contains several important buildings that are listed for their historical and architectural value. some of the buildings include The Old Dairy, The Old Bakehouse, The Old brewery and Church Hill Cottages, all of which are protected by law.[10]

The Saint Mary the Virgin Church was first built in the 12th century from flint and white limestone with a roof made from tile and led,[11] and has stood for around 700 years. The last pair of arches towards the East are the oldest, the second and third arches were decorated with mediaeval paintings up in till the 1860s when they were painted over against the advise of architect William Eden Nestfield. In 1850 the porch, door and West tower, including a spire were added and between 1868 and 1882 the church was renovated and enlarged by architect William Eden Nesfield. Reverend John Frederick Walkinson Bullock undertook the restoration on his own initiative and mostly at his own expense. The restoration included the rebuild of the Chancel, south and north isles, and the celerestory being remade from old materials. The north and south organ chambers were also added to create the church that stands today.[12]