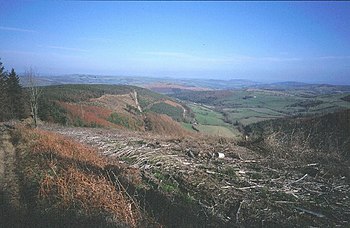 Radnor Forest (Welsh: Fforest Faesyfed) is a rock dome in the hills of Radnorshire, not all over wooded but a forest in the mediæval sense of an unenclosed area.[1]. There are nevertheless, beautiful and extensive woodlands within the forest.

The highest point of the Forest is Great Rhos, a great hill in breadth, whose top is a broad, boggy, featureless plateau which reaches 2,166 feet. A similar hill adjoining to the east is Black Mixen, which rises up beyond the steep-sided valley of Harley Dingle.

According to a legend, the local people built four churches in a circle around the Radnor Forest in order to contain the last dragon in Wales, who lay sleeping in the area. The churches, at Llanfihangel Cefnllys, Llanfihangel Rhydithon, Llanfihangel Nant Melan and Llanfihangel Cascob, were all dedicated to St Michael (Welsh: Mihangel) the Archangel who is portrayed as a victor over the dragon. Some people believed that the dragon would awaken if any of the four churches were destroyed [2]. 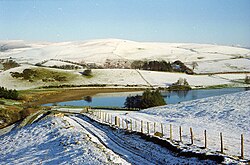 Radnor Forest from the south