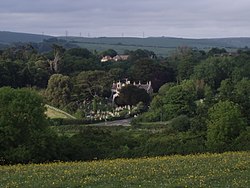 The graveyard and the distinctive belfry of St Ann's Church, Radipole, as seen from nearby Southill. The old Manor House lies behind the church.

Radipole is a village and ancient parish in Dorset, that forms a suburb of Weymouth.

Radipole stands at the head of, and is named after, the lake, now an RSPB nature reserve, into which the River Wey flows, and which leads into Weymouth Harbour. Until 1984 it had a railway station on the South Western Main Line out of Weymouth.

There is some evidence of prehistoric occupation, and it is believed that the Romans had a small port or landing stage at the head of the lake. A Romano-British burial site was found nearby when the upper playing field of Southill Primary School was constructed. A Roman road runs from Radipole to Dorchester (the former Durnovaria), and indeed still forms by far the greater part of the line of the present road between Weymouth and Dorchester.

The parish of Radipole predates by centuries the borough of Melcombe Regis, which grew up on its wastes on an exposed spit of shingle by the sea in the 12th century. The church of Saint Ann was the mother church of Melcombe Regis until 1606. The church is distinguished for its triple bellcote, consisting of a single arch above double arches.

In the last decades Radipole has experienced suburbanisation and accompanying road-building, as nearby Weymouth has expanded northwards. However the centre of the old village still remains. The attractive architectural group formed by the church and the manor house is well-known locally. The field known as Humpty-Dumpty Field immediately to the south of the churchyard, on the slope leading down to the head of the lake, is supposed once to have covered the site of the lost mediæval village, and possibly even Roman remains, but any such evidence was destroyed by the action of the then landowner.