Prittlewell is a village of Essex which has become subsumed within the swollen townscape of Southend-on-Sea. The swallowing of Prittlewell is particularly cruel since Prittlewell was the original small town here, and had a mere hamlet on the Thames Estuary as its 'South End', but the hamlet grew with the coming of the railway and of holidaymakers, and has overwhelmed its parent.

The village of Prittlewell was originally centred at the joining of three main roads, East Street, West Street and North Street, which was extended south in the 19th century and renamed Victoria Avenue. The principal administrative buildings in Southend are located along Victoria Avenue, although Prittlewell is now mainly a residential area.

The first signs of settlement by the Prittle Brook can be dated back to 10,000 years ago in the late Stone Age. Traces too may be found from the succeeding Bronze Age and Iron Age.

The Roman occupation began to influence the area with the construction of a Roman-style dwelling, probably a farmhouse or villa close to the brook in what is now Priory Park. The introduction of new ideas, new skills and social structures under this Roman influence would have brought significant change to the area. The discovery of Roman burial sites during road and rail construction in the 1920s and 1930s indicated that the settlement was well developed and of some significance, although no prominent buildings were preserved.

The cComing of the English

Following the decline of Roman Britain, the area came under the influence of Saxon raiders, over time becoming established as part of the kingdom of the East Saxons. During this time (largely the 5th and 6th centuries), the historic Saxon name of Prittleuuella came into being.

The construction works of 1923 and 1930 that revealed Roman burials also unearthed evidence of numerous Anglo-Saxon burials, a significant number of which were high-status or warrior burials containing weapons, imported goods, jewellery and decorative beads some of which were made of glass.

In 2003 a substantial and undisturbed 7th-century chamber tomb was found at Prittlewell. The unusually rich contents and their condition have excited archaeologists, being described as "unique" by the Museum of London, and it appears show that Prittlewell was a high status location in the Middle Saxon period. The Museum of London conducted a substantial investigation of the site. The burial is thought to be of King Sæbert of Essex.

The story of the excavation was also thought so significant as to be the subject of a special television documentary titled "The King of Bling", as part of the Time Team series.

The burial site was uncovered by archaeologists from the Museum of London, who had been commissioned in 2003 to prepare the site in advance of a road widening scheme.[1] In 2009, following local opposition, the scheme was dropped and the traffic congestion eased by works to a different road location.[2]

At the time of the Domesday Book in 1086 the two manors in the area that is now Prittlewell were Prittlewell and Milton, the former owned by Swein of Essex and the latter by the Priory of Holy Trinity, Canterbury (now Canterbury Cathedral).[3]

In the 12th century Robert de Essex, also known as Robert FitzSwein, founded Prittlewell Priory as a cell of the Cluniac Priory of St Pancras, Lewes. The foundation charter included the manor and church of Prittlewell.[4]

At this time the lands of the priory extended to right down to the seafront. Due to this, when a fishing settlement was set up two miles south of the priory in the 14th century, it was still regarded as part of Prittlewell and as such was named Stratende, Sowthende or South-End. From this settlement the modern town of Southend-on-Sea grew.

Over a period of around two hundred years the Parish Church, St. Mary's, was substantially enlarged, reaching its present size with the addition of its tower in the mid-15th century.

At the time of the Dissolution of the Monasteries by King Henry VIII, the priory, which had by this time developed into a sprawling complex, was closed and the lands seized by the crown. 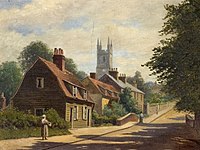 Southend was developed as a bathing resort in the 18th century and by the 19th, Prittlewell was regarded by visitors to Southend as "an attractive village in the hinterland". In 1848, Prittlewell was described in the White's Directory of Essex as "a neat and well built village with many modern houses overlooking the estuary of the Thames, 1½ miles North West of Southend, and 3 miles South of Rochford"[5]

Links between Prittlewell and Southend were improved in 1889 a road was built between the village crossroads by the church to Southend, named Victoria Avenue and in 1892, when Prittlewell railway station was built on the Great Eastern Railway linking Southend and London

The old priory, which had been in ownership of the Scratton family was bought by local jeweller and benefactor R A Jones and was given to the people of Southend as Priory Park. In 1901, Eric Kingham Cole was born in Prittlewell, and went onto form EKCO, the radio, TV and plastic manufacturers in 1924. In 1930, he built a large factory opposite Priory Park but by 1966 the electrical side of the factory was closed (except for the Car radio repair department which closed in 1977). The Access (credit card) business moved into the factory in 1972, but with the business changing in the 1990s, Royal Bank of Scotland moved out, leaving the EKCO (now Linpac) plastic factory the only operative on the site. This closed down in 2007, and the whole site was demolished in 2012, with a combined housing and commercial development (and a new Havens Hospice) being given planning permission on 14 Jan 2015.[6]

Only a small proportion of the historical village of Prittlewell remains standing; the ruins and standing remains of the Priory, visible in Priory Park; St Mary's Church; A building recently restored following fire damage, though more recently a bakery, now an estate agent appropriately named Tudor Estates; as well as a number of public houses, the most famous of which is the Blue Boar. This is famous as being where Southend United FC were formed, however the building that currently stands there is of Victorian construction, as the original building was destroyed by fire.

Since 1955, Prittlewell has been the home to Southend United FC at their ground Roots Hall, and has been since the 1960s home to a weekly market which takes place on a Thursday. Southend are planning to move from this location, and Sainsbury's currently have planning permission to build a supermarket on the site of Roots Hall, St Mary's flats, the former Eastern National Bus Garage/former Prospects College and the shops on the corner of Victoria Avenue and Fairfax Drive.