Pipe Aston is a tiny village in northern Herefordshire, on the minor road over the hills between Wigmore and Ludlow. The Shropshire border is just up the hill. It was originally named simply Aston, a common place-name, but became known as Pipe Aston from the clay pipes which were made here from about 1630 and for about two hundred years. The village contains the remains of many kilns which are being excavated.

Two castle mottes stand by the village, testifying to its strategic position in unquiet times. Aston Tump, just north of the church, is the earthwork of a motte and bailey fort, and the moat still has some water in it.

Often believed to be one of the Thankful Villages, those few villages whose men all returned safe from the First World War, more recent research has found that Pipe Aston did lose one of its sons in the Great War, one John Deakin, presumed to live in the village.[1] Nevetheless, Pipe Aston has no war memorial.

The village church is St Giles, (within the united benefice of Wigmore Abbey).[2]

St Giles is a small, Norman church. Apart from some minor rebuilding in the thirteenth century, it is largely unaltered. The nave has the original Norman wall paintings; the font appears to be the inverted capital of a column with a complex carving of a single dragon chasing its tail.

The church has a striking carved tympanum over the north doorway, showing a Paschal Lamb with "the eagle of St. John and the winged ox of St. Luke on either side, and a border with a bird among foliage, slithering beasts, and curious dragons."[3] 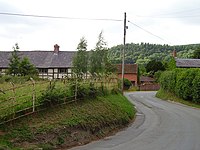