Pilton is a village in Somerset, on the A361 road three miles south-west of Shepton Mallet and six miles east of Glastonbury, the latter a town whose name is entwined closely with the fortunes of Pilton, as it is a farm in Pilton on which the Glastonbury Festival is held each year.

The parish includes the hamlets of West Compton, East Compton, Westholme, Beardly Batch and Cannards Grave. The village had a recorded population of 998 in 2011. The parish of Pilton is part of the Whitstone Hundred of Somerset. 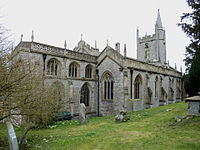 The parish church is the Church of St John the Baptist. It is of Norman and Mediæval build and may stand on the site of an earlier wattle and daub church built by the early missionaries. It has been designated as a Grade I listed building.[1] 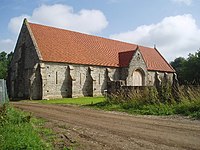 Cannard's Grave is to be found on the southern edge of Shepton Mallet. Local legend (of which there are several versions) says that, in the 17th century, the publican of the local inn, Giles Cannard (possibly also known as Tom the Taverner), engaged in criminal activity such as robbing, or aiding and abetting the robbery of, his guests, theft, smuggling and possibly forgery. His activities having been discovered, he either committed suicide or was convicted and hanged from the gibbet at the adjacent crossroads and buried nearby.[2][3] Other explanations of the name include a tale that Kenred a pagan and uncle of King Ine of Wessex who converted to Christianity was buried there. Perhaps the most likely story is that a thief convicted of sheep stealing was tried and hanged at the site.[4]

The village has a Grade II* listed manor house[5] and a Grade I listed tithe barn, which once belonged to Glastonbury Abbey.[6]

Pilton is famous as the location of the Glastonbury Festival, which is run by Pilton farmer Michael Eavis and his daughter Emily Eavis. Being the village at which the festival is held, all villagers get a free ticket.