Pershore Abbey is the parish church of Pershore in Worcestershire. Once it was the church of an Anglo-Saxon abbey and is now a Church of England parish church.

The foundation of the minster at Pershore is alluded to in a spurious charter of King Æthelred of Mercia (r. 675-704). It purports to be the charter by which Æthelred granted 300 hides at Gloucester to Osric, King of the Hwicce, and another 300 at Pershore to Osric's brother Oswald.[1][2] The charter is preserved only as a copy in a 14th-century register of Gloucester, where it is followed by two charters listing the endowments made to the abbey until the reign of Burgred, King of Mercia (852-874).[3][4] The 300 hides mentioned here are unlikely to be a contemporary detail, as they were intended to represent the triple hundred which later made up the area of Worcestershire.[1] Historian H. P. R. Finberg suggests that the foundation charter may have been drafted in the 9th century, based on some authentic material.[5] Oswald's foundation of a monastery at Pershore is not stated explicitly in the charter, but the Worcester chronicle Cronica de Anglia, written c. 1150, reports it under the annal for 683, and John Leland, consulting the now lost Annals of Pershore, places the event around 689.[1][6] Patrick Sims-Williams suggests that the foundation by Oswald may also represent an oral tradition at Pershore, as its archives were probably destroyed in fires of 1002 and again in 1223.[1]

In the 9th century, Pershore comes to light again as a minster under the patronage of Mercian kings. In other charters contained in the Gloucester register, Kings Coenwulf (r. 796-821) and Burgred are recorded as having been patrons of Pershore.[4] A charter of King Edgar, King of the English, refers back to a grant of privileges by Coenwulf at the request of his ealdorman (dux) Beornnoth.[1][7]

In the reign of King Edgar (959-975), Pershore reappears as one of the abbeys to be re-established (or restored) under the programme of Benedictine reform. Writing c. 1000, the Ramsey monk Byrhtferth relates that under the auspices of Oswald, Bishop of Worcester, seven monasteries were founded in his diocese, notably including Pershore.[8] The first abbot was one Foldbriht,[9] whose name is sufficiently rare to suggest that he may be the same Foldbriht whom Bishop Æthelwold previously installed at Abingdon and used to be a monk of Glastonbury before that time.[10]

The refoundation is what lies behind an exceptionally elaborate charter for Pershore, dated 972, in which King Edgar is presented as granting new lands and privileges as well as confirming old ones, such as the one granted by Coenwulf.[7] The authenticity of this document, however, has been questioned. Simon Keynes in 1980 showed that it belongs to the so-called Orthodoxorum group of charters, so named after the initial word of their proem, which he concluded were forgeries based on a charter of Æthelred II's reign.[11] Other historians have though raised doubts about such doubts; Peter Stokes has brought to light a variant copy of the charter and suggests that two different versions may have been produced around the same time, somewhere between 972 and 1066. A possible scenario is that they were produced to make up for the loss of the original charter(s), perhaps shortly after the fire which is reported to have destroyed the abbey in c. 1002 (see below).[12]

The 12th-century historian William of Malmesbury claims that Egelwardus, ealdorman of Dorset founded the abbey of Pershore in the time of King Edgar,[13] named Alwardus by Eadburh of Winchester. This may be Æthelweard, the chronicler and ealdorman of the western shires.[14][15]

In the later 10th century it seems that Pershore went into decline, its lands seized from it and thus its income. 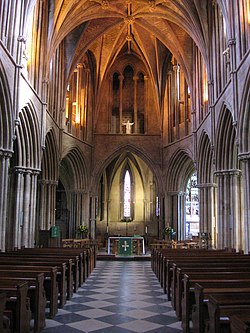 In 1002 or thereabouts, Pershore was destroyed by fire and deserted by the monks,[16][17] The monastic archives were lost in the fire, as no original record from before that date survives today.[18] However the wealthy nobleman Odda of Deerhurst (d. 1056) restored many of its lands and granted new ones.[18][19] The monastery was active again by the 1020s, as its abbot Brihtheah was promoted bishop of Worcester in 1033.[18] Odda's brother Ælfric was buried at Pershore in 1053, joined three years later by Odda himself.[18] In Odda's life-time, the total landed assets of Pershore grew to 300 hides, but after the loss of its benefactor in 1056, about two thirds were seized and given to Edward the Confessor's new foundation at Westminster.[18] The original single sheet which preserves the fullest version of King Edgar's refoundation charter (though it need not be authentic) is marked by a number of textual alterations and erasures. Some of these changes may suggest a response to the abbey's proprietary struggles.[12]

From the early 12th century, there is evidence that Pershore Abbey claimed possession of some of the relics of Saint Eadburh of Winchester, the sainted daughter of King Edward the Elder. Her body was initially buried at Nunnaminster (Winchester), but it was translated in the 960s to a more central spot in Winchester, and again to a shrine in the 970s. Among several possibilities, Susan Ridyard has suggested that the Eadburh whose relics were preserved at Pershore may have been a Mercian saint of that name whose identity had become obscure.[20]

The main building was begun in about 1100. In the fourteenth century it benefitted from the generosity of Adam de Harvington, Chancellor of the Exchequer 1327-30, who was probably related to the Abbot, William of Harvington.

The abbey church remained in use as a parish church. When the north transept collapsed in 1686, a wall was built in its place. Further alterations were carried out, including a restoration by George Gilbert Scott in 1862-64. His work included the removal of the belfry floor and the opening up of the lantern tower to expose the beautiful internal tracery panelling. Scott described the lantern as the finest in the country after that of Lincoln Cathedral. The tower pinnacles were added in 1871.[21]

In 1913, two western flying buttresses were added to replace the support from the missing portion of the building. 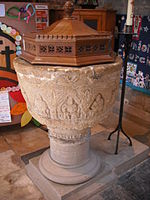 The church as it now stands represents only a small portion of the original building.

Major repairs were undertaken in 1994, to stabilise the south transept with a ring beam and to strengthen its roof and to repoint the tower and pinnacles. An underfloor heating system was installed.

Pershore Abbey has a 25 cwt ring of eight bells. The ringing room, devised as part of Scott's 1862-64 restorations, is a metal 'cage' suspended high above the chancel crossing; it is accessed by means of two stone spiral staircases, a walkway through the roof, a squeeze through a narrow passage and a see-through iron staircase.

In about 1840 the Abbey was given a new font and the original Norman font was cast out into the churchyard. It was later used as a cattle trough, and later used in a garden at nearby Kempsey. In 1912 a war memorial was erected on the site of the Victorian font and the old font was returned, on a pedestal designed by Harold Brakspear. The font is decorated with an interlacing arcade, in the panels of which are the figures of Christ and his Apostles.[22]

A three manual organ built by Nicholson of Malvern in 1872, was removed several years ago and replaced with a Bradford electronic organ. There are currently no plans to re-install a pipe organ at Pershore Abbey. The Nicholson was restored twice by J. W. Walker & Sons Ltd in 1940 and 1971.[23]