Ordsall is a village attached at the south-west of the market town of Retford in Nottinghamshire (otherwise known as East Retford). A population of 14,194 was recorded at the 2011 census.

The River Idle and the Great Northern Rail Line divide Ordsall from Retford.

The parish church is All Hallows' Church, which serves the village and stands beside the River Idle at the south side of Ordsall, in an area sometimes referred to as "Old Ordsall".

There is no record of Ordsall before the days of William the Conqueror, when the land was chiefly marsh. In the Domesday Book of 1086, the name of the village is Ordeshale and in other early documents the name was Ordesale. In 1637 it was even printed on a map as Ardsall, however these corruptions of names are usual everywhere. 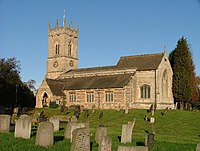 For centuries the parish of Ordsall consisted of the village and two small hamlets, Thrumpton and Whitehouses. Ordsall Parish became part of the Retford Area Team Ministry, the area covered by the former Retford Deanery, in April 2011. The ecclesiastical parish of Ordsall covers a much larger area than Ordsall village. Whereas the village is bounded by the river and railway lines, the parish extends northwards towards the centre of East Retford as far as Albert Road.