Oakford is a village in the midst of Devon, to be found three miles south-west of Bampton and eight miles north of Tiverton. The River Exe flows just over half a mile to the east of the village, where Oakfordsbridge stands by the river bank.

The village had a population of 358 according to the 2011 census. It is within the Witheridge Hundred.

In the 1870s Oakford was described as:

"OAKFORD, a village and a parish in Tiverton district, Devon. The village stands on a bold acclivity, adjacent to a tributary of the river Exe, 2 miles S of the boundary with Somerset, 3 W S W of Bampton, and 6½ N N W of Tiverton r. station; is large and straggling; and has a post-office under Tiverton. The parish comprises 5, 464acres."[1]

The parish church, St Peter's, dominates the village from an eminence. It dates from the thirteenth century, but after disastrous fire ravaged it, the body of the church was completely rebuilt in the nineteenth century so that it is essentially an early Victorian church.

The 15th century tower still stands. The porch, nave, cancel and vestry were rebuilt in 1838-9 though after the fire, giving the church a spacious nave and short chancel. The tower houses eight bells, said to have exceptional tone, cast by Mears of London in 1825 and given to the church by the then rector, the Rev James Parkin. He also presented the organ, built by J R Mortimore of Tiverton, in 1841.[2]

Spurway Barton lies remote above a wooded combe and was a Domesday manor. The Spurways were already settled here in 1244 and continued to own it until recently. Other farms mentioned in Domesday are Bickham Barton, Mildon, Woodburn and East and West Tapps.

There is no school in Oakford, however there is an educational foundation in place. The Pyncombe Educational Foundation assists pupils in the advancement of their education and otherwise promoting education of boys and girls in the beneficial area. The Foundation awards grants of £150 to help with purchase of books and equipment to any young person who lives in Oakford, or who has lived here within the last year, and is continuing with further education. The award is made in September and is given directly to the person concerned.[3]

The Pyncombe fund as it exists at present was set up in 1998 through the amalgamation of several Oakford village charities. Its origin is in a series of bequests by Miss Gertrude Pyncombe of Poughill who, in 1730, left money for the teaching of poor boys and girls in a number of Devon parishes, amongst other charitable bequests.[4] 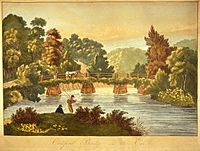