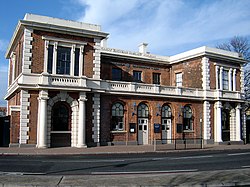 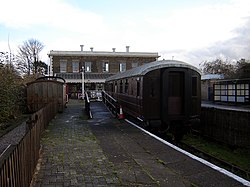 North Woolwich is the northern part of Woolwich within the metropolitan conurbation. Despite being located on the north bank of the River Thames it forms part of Kent. The two places are linked by the Woolwich Ferry and the Woolwich Foot Tunnel.

Historically North Woolwich consists of two nearby tracts of land, totalling 412 acres, situated on the north bank of the River Thames. The western detached part being surrounded on three sides by the parish of East Ham and the eastern portion bordering East Ham to the west and Barking Town to the north.[1]

The now disused North Woolwich railway station, which was closed in preparation for future transport developments which will use sections of the line, is situated adjacent to the ferry terminal. An extension of the Docklands Light Railway to the area opened in December 2005. Until 2009, this terminated at King George V; a further extension south of the river, to Woolwich Arsenal, opened in 2009. This situation means that North Woolwich now sports two old station buildings. The closed North London Line station is adjacent to an earlier station which closed in 1979; this has housed the Old Station Museum since 1984, which is devoted to the history of the Great Eastern and London and North Eastern railways.

North Woolwich has formed part of Kent since at least since the Norman Conquest when one of William the Conqueror's lords, Hamon, was granted land on both sides of the Thames at this spot, probably to enable him to enjoy the taxes from cross-river traffic.[2] The population peaked just before the First World War, and reduced substantially in the Second World War when it was heavily bombed.

The area was formerly the site of industries including the cable works of William Thomas Henley (later Associated Electrical Industries) and the Western Electric Co (later Standard Telephones and Cables) on the river to the west of the ferry, and a large Harland & Wolff ship repairing shop at Gallions Point to the south of the King George V Dock entrance lock (not to be confused with their works at the western end of the dock).