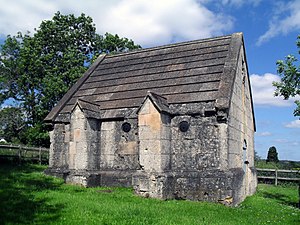 The North Hinksey Conduit House stands overlooking the River Thames on Harcourt Hill near North Hinksey in Berkshire. It is a remarkable, seventeenth century, stone-built conduit house, built to supply neighbouring Oxford with water from the springs here. Long disused though it is, the building is roofed and in good order.

The conduit house is a remarkable survival of Oxford’s first piped water supply. It was built during the early 17th century as part of a system designed to take clean drinking water from the springs at North Hinksey through the Carfax Conduit to its extravagantly decorated fountain which stood in the centre of Oxford (now removed to Nuneham House).

The North Hinksey Conduit House resembles a fortress in miniature. It covered and protected a 20,000-gallon lead cistern and this continued to supply water to the city until 1868.

On the walls are some beautifully chiselled graffiti dating from the 17th to 19th centuries.