Newport-on-Tay is a small town in the north east of Fife which serves as a commuter suburb for Dundee. The Fife Coastal Path passes through Newport.

Newport currently has a population of about eight thousand, most residing in stone houses built before Second World War. The town centre comprises two main streets where may be found a small variety of shops, two public houses, two churches and one primary school, Newport Primary, with older pupils attending secondary school in St Andrews, Cupar or the High School of Dundee, the nearest independent school. 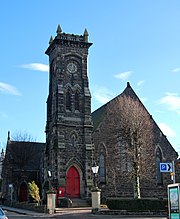 Newport on Tay Church of Scotland

There are three churches in Newport:

The Congregationalist Church closed in 1986 but stands in the town.

The town was established near the endpoint of one part of a ferry route that itself was started in the 12th century.

In 1715 a new pier and inn were built, the work being funded by the Guilds of Dundee which resulted in the settlement being called "New Dundee". Thomas Telford built a new harbour in the 1820s, and the town expanded and grew into a commuter suburb of Dundee as the prosperous jute manufacturers, industrialists and the middle class|middle and skilled worker|upper working class of Dundee established fashionable residences in Newport.

Newport-on-Tay formerly had two railway stations; the East and West stations. Both stations (and the Tayport-Dundee branch line) closed in 1969, having lost much of their business following the opening of the Tay Road Bridge in 1966.

An excavation carried out by Headland Archaeology [1] in the farm of North Straiton near Newport-on-Tay uncovered part of a Bronze Age cremation cemetery and a line of postholes. Five human cremations were found in a group of scattered disposal pits. Around 25m away was a line of postholes, one of which was also associated with cremated human bone. Radiocarbon dates from the features indicated that they had been created in the Bronze Age, from around 1700 to 2000 BC. The line of posts was substantial and may have been associated with the cremations rather than a building or fence. It is possible that the posts may have been memorials or markers close to the pyre used to burn the dead. Part of a quern stone and some burnt animal bone suggested that the cremation ceremony also involved preparing food. A collection of pottery was found with the cremations. This included a complete accessory vessel and fragments from a larger decorated pot that covered it.