From Wikishire
(Redirected from Newport, Devon)
Jump to: navigation, search

Barnstaple is a town in north Devon, standing at the head of the Taw Estuary. It is the main town of the area and claims to be the oldest borough in the United Kingdom.

The town stands at the lowest crossing point of the River Taw, some 3 miles from where the Taw empties into the open sea at the Bristol Channel. Below Barnstaple the Taw creates a long, sheltered harbour.

By the time of the Domesday Book of 1086, Barnstaple had its own mint. The town's size and wealth in the Middle Ages was based on its position as a staple port, one of a limited number of ports licensed to export wool. The natural harbour of the Taw estuary provided Barnstaple with steady trade, and many ships operated from here. The town's seamen provided five ships which joined the fleet sent against the Spanish Armada in 1588.

Barnstaple has been a borough since before the Norman Conquest, and thus returned two members to Parliament before the Reform Act. Since 1974, it has been reduced to a civil parish with a town council, which council maintains its borough charter.[1] The town has a population of 20,724.[2]

In the early tenth century the town's name appears as Bardanstapol, and the Domesday Book clerks wrote it Barnestapla. The origin is Old English but otherwise unknown; perhaps meaning "spearpost" or "ship's post".

An alternative name seen on occasion is "Barum", but the origin of this name is obscure; it has been suggested that it is a cod-Latin extension of the abbreviation "Bar.", as is Sarum for Salisbury. "Barum" was popularised in Victorian days, featuring in several novels of the time. The name is retained in the names of a football team, brewery, and several other local businesses. The former Brannam's pottery which was sited in Litchdon Street was known for its use of "Barum" scratched beneath its interesting local pottery products.

Development of the town's character

Barnstaple has an eclectic and somewhat haphazard mix of buildings developed over hundreds of years with the 19th century probably now predominant. There are some remnants of early buildings to enjoy as well as several early plaster ceilings which survived the undue attentions of the Victorian age and 20th century.

St Anne's Chapel in the central churchyard is probably the best of the ancient buildings to survive. Queen Anne's walk and the Georgian Guildhall remain to delight the eye. The town museum tells the story of Barnstaple, but is a building of interest in its own right, with tessellated floors and decorative fireplaces.

In 1989, the A361 North Devon Link Road was constructed, linking Barnstaple with the M5 motorway, some 40 miles to the east. Because Barnstaple is the main shopping area for North Devon, retail work is a contributor to the economy. Many generic chain stores are located in the town centre which is very typical of the area and on the Roundswell Business Park located on the western fringe of the town. 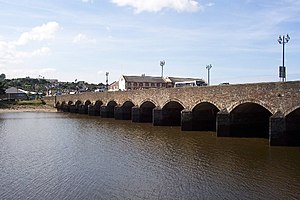 Built in 1855, Butchers Row consists of ten shops with pilasters of Bath Stone, and wrought iron supports to an overhanging roof. Only two of the shops remain as butchers although the new shops still sell local agricultural goods. There is one baker, one delicatessen, two fishmongers, a florist and a greengrocer. 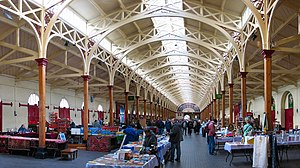 Barnstaple fair begins on the Wednesday before 20 September each year.

The ceremonial opening of the fair survives from time immemorial. The town council meets in the Guildhall, where various toasts are honoured with a spiced ale which, according to tradition, is made from a jealously guarded recipe handed on from generation to generation. Whilst the toasts are being honoured, "fairings", (a form of sweetmeat) are handed around.

Today the fair consists of rides and amusements located in the car park of the leisure centre. 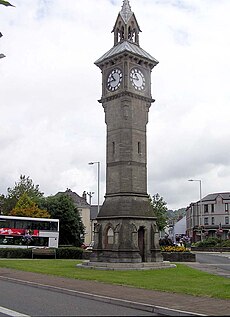