Netley Marsh is a village in Hampshire, at the head of Southampton Water close to the town of Totton. It lies within the New Forest National Park.

This place is the alleged site of the battle between an invading Saxon army, under Cerdic and a British army under Natanleod in the year 508 and to have taken its name from the British prince.[1]

Netley Marsh lies to the west of Southampton. The village is on the A336 road from Cadnam to Totton. The parish is bounded by Bartley Water in the south, and River Blackwater in the north. The village of Woodlands is in the south of the parish, and the hamlets of Hillstreet and Ower (chiefly in Copythorne parish) are to the north. The M27 motorway runs through this parish, taking roughly the route of the Roman road from Nursling to Cadnam.[2] 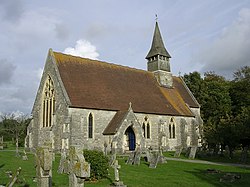 The parish church is dedicated to St Matthew. It was built around 1855, and consists of a nave and chancel with a bell turret on west side of the chancel.

Netley Marsh is often identified with the "Natanleaga" described in the Anglo-Saxon Chronicle under the year 508. The Chronicle records that the Saxon kings Cerdic and Cynric "killed a certain British king named Natanleod, and five-thousand men with him – after whom the land as far as Cerdic's ford was named Natanleaga".[3]

The place Cerdicesford is usually identified with North Charford and South Charford near Fordingbridge, at the very western edge of Hampshire, so the old land of Natanleag must have been a broad area. Whatever the truth concerning the battle, scholars doubt that there was a king called Natanleod, asserting that he was invented to explain the place-name Natanleaga.[4] The place-name is probably derived from the Old English elements næt and leah, meaning "wet meadow".[4]

To the west of the village the Hampshire Reformatory School opened in 1855.[5] It was built for the purpose of reclaiming juvenile offenders, and had accommodation for 60 boys.[6] It was closed in 1908. The civil parish of Netley Marsh was one of the parishes formed from the ancient parish of Eling in 1894.[5] The village suffered some damage during Second World War, when one day in 1942 an enemy aeroplane dropped bombs on the church and along Woodlands Road, causing the deaths of three people.[7]

One mile north of Netley Marsh is the ancient site of Tatchbury. There is an Iron Age hill fort here called Tatchbury Mount.[8] It has been partly built over by hospital buildings but the outline of the fort can still be seen.[8]

Next to the hill fort is the ancient manor of Tatchbury.[5] Its history dates from the 10th century when a hide and a half of land in Tatchbury[9] and Slackstead[10] was given to Hyde Abbey (near Winchester) on its foundation in 903 by Edward the Elder.[5] The Domesday Book refers to another half hide being given to the Abbey at some time after 1066 by Edsi the Sheriff.[11] The abbot and convent evidently held the manor in demesne from the 12th to the 13th century, and a rent from Litchfield and Tatchbury was included in the estates of the Abbey at the time of the Dissolution.[5]

Another estate in Tatchbury is recorded in the 13th century which may have been the nucleus of the later manor which was held in 1316 by Elias Baldet, and of which John Romsey died seised in 1494, holding it of the warden of Winchester College.[5] The Oviatt family held the manor for much of the 17th and 18th century, before passing to the Wake family who held it until the late 19th century.[5] Tatchbury Manor House today is mostly a brick Victorian building, but which incorporates part of the old 13th century manor house.[2] 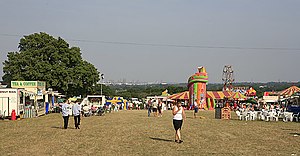 The Netley Marsh Steam and Craft Show[12] has been held each year since 1971. It is a three-day event dedicated to demonstrations of steam powered vehicles and traction engines held in July of each year.