Opened by Elizabeth II in February 1976, the first event to be staged at the venue was International Spring Fair, which has returned every year since. Growing annually, the event now occupies all of the NEC's 20 halls and the Genting Arena.

The Genting Arena was previously the 'NEC Arena and LG Arena'.

In November 1971, the Secretary of State for the Environment granted outline planning approval for the National Exhibition Centre in Birmingham. The NEC, originally comprising 958,000 square feet of exhibition space, was opened by The Queen on 2 February 1976. The building was designed by Edward Mills.

In 1989, the Queen opened three further halls, increasing the space to 1,345,500 square feet. Four more halls were added in 1993, the total exhibition space increasing to 1,700,700 square feet. Another four new halls, opened in September 1998, took the total space to 2,045,142 square feet. These buildings were designed by Seymour Harris.

The NEC is nearing completion of a five-year, £40 million venue improvement programme which has seen improvements made to everything from the car parking to signage, seating and catering. The most obvious result of this development has been the redesign of the Piazza – the central space around Halls 1 to 5, which has received a contemporary update. 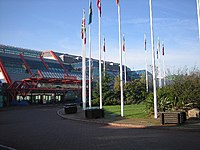 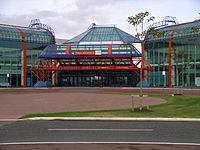 The National Exhibition Centre was home to the British International Motorshow from 1978 to 2004. In addition, it also hosted the Classic Motor Show.

Since 1991, the NEC has been the venue for the international dog show Crufts. Held over four days and using five halls as well as the Genting Arena, Crufts attracts an estimated 160,000 visitors annually. The 1991 show was also Crufts centenary year and as part of the celebrations to mark the occasion, the Guinness Book of Records gave official recognition of the event's status as the world's largest dog show, with 22,973 dogs being exhibited that year.

The NEC was the venue for the Iron Maiden live album, Maiden England. It also the venue for Great Britain's Davis Cup match against the Netherlands in 2007.

Driving for 11- to 16-year-olds with Young Driver happens regularly at weekends in the National Exhibition Centre car parks.[2] 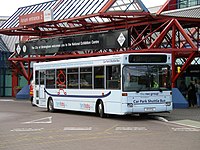 The NEC has 29,000 car parking spaces spread around the site, with a shuttle bus service operating to and from the car parks.

The venue is owned within The NEC Group, which also owns and operates the Arena Birmingham and International Convention Centre, both in central Birmingham, and the Genting Arena, based on the NEC site.