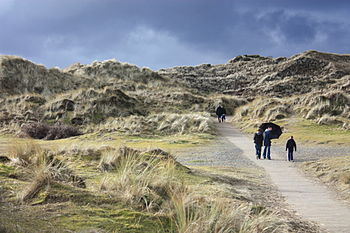 Murlough Nature Reserve lies on the coast of County Down, close to Newcastle. The reserve extends over 697 acres and offers spectacular views of Slieve Donard, the highest peak in the Mourne Mountains, and Dundrum Bay. Murlough's 6,000-year old sand dune system has been managed by the National Trust since 1967, when it became Ulster's first nature reserve.

At 697 acres, it is the best and most extensive example of dune heath within Ireland, with a network of paths and boardwalks through the dunes. It is an important wintering site for many species of bird, including thrushes such as Fieldfare and Redwing, which feed off the Sea-buckthorn's orange berries. Breeding birds include Meadow Pipit, Skylark, Cuckoo, Stonechat, Linnet and Reed Bunting. Shorehauling Grey Seal and Common Seals are also common in the area. Between 50 and 130 common and grey seals regularly use the area for moulting, resting and feeding.[1] Rare plants local to the site are pyramidal orchid and Carlina|carline thistle. Many rare and beautiful butterflies occupy the reserve. Of the of 23 butterfly species recorded at Murlough, the Marsh Fritillary, is of European importance - other notable species include Dark-green Fritillary Argynnis aglaja, Grayling Hipparchia semele and Cryptic Wood White Leptidea juvernica. One species, the Wall Butterfly Lasiommata megera has not been recorded for several years and is considered extinct at this site. Nearly 600 species of moths have been recorded within the boundary of Murlough Nature Reserve, more than at any other site in Northern Ireland, of which 41 are Northern Ireland Priority Species. It also has access to one of the finest beaches in County Down.

Murlough makes up one fifth of all dune heathland in the British Isles, but remains under threat from the encroachment of scrub vegetation such as bracken and gorse and non-native species such as Sea Buckthorn. In 1999 the National Trust established the South Down Heathland project, a five-year programme to protect the habitat. It has been designated an Area of Special Scientific Interest and a Special Area of Conservation.

The area has evidence of human habitation from Neolithic times, through the Bronze Age to the present day. In the 12th century a rabbit warren was established on the site by the Normans for their meat and pelts. This had a major influence on the development of the heath and grassland found today. A particularly stormy period in the 13th and 14th centuries resulted in a huge movement of sand which led to the unusually high dunes also found today.