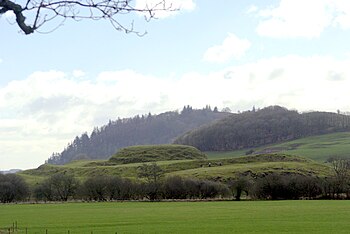 The Motte of Urr

The Motte of Urr, is a great castle motte in Kirkcudbrightshire, beside the River Urr to the northwest of Dalbeattie.

Once a castle stood here, on the great motte, but it has long since been demolished and vanished. It was a mediæval motte-and-bailey castle. Today this earthwork, near the Haugh of Urr, is said to be the most extensive bailey earthwork in Scotland.

These castle works date from the 12th century, and the earthworks today cover an area of about 5 acres. To date, there are no excavations or walls.

The Motte of Urr is associated with the lost Buittle Castle, a courtyard castle dating to about 1230, which was destroyed early in the 14th century and belonged to Devorguilla and her husband John I de Balliol (founder of Balliol College, at Oxford University). Together they bore the future king John of Scotland.