From Wikishire
(Redirected from Mold, Flintshire)
Jump to: navigation, search

Mold is a town in Flintshire, on the River Alyn. It forms part of the Mold Hundred, which is named after it. 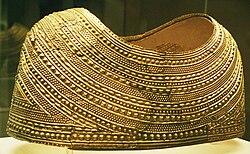 In 1833, workmen digging a prehistoric mound at Bryn yr Ellyllon (Fairies' or Goblins' Hill) discovered a unique golden cape, which dates from 1900-1600 BC, in the Bronze Age. The cape weighed 20 oz and was produced from a single gold ingot about the size of a golf ball.

The cape was broken when found and the fragments were shared out among the workmen, the largest piece going to Mr Langford, tenant of the field in which the mound stood.

The find was recorded by the Vicar of Mold and came to the notice of the British Museum. In 1836 Langford sold his piece to the Museum and subsequently most of the pieces were recovered, though there is a tradition that the wives of some of the workmen sported new jewellery after the find. Restored, the cape now forms one of the great treasures of the British Museum in London.[1][2]

About a mile west of Mold is Maes Garmon, (The Field of Germanus), the traditional site of the Alleluia Victory by British forces led by Germanus of Auxerre over invading Picts and Scots, which was fought shortly after Easter 430.

The town of Mold grew up around Mold Castle, now in ruins. The castle was built by Robert de Montalt in around 1140, and was the site of frequent battles between the forces of the English and of Welsh princes. A chroncle reporting Owain Gwynedd's rebellion in 1146 says that Owain captured Mold castle, though it is equally possible that a castle of the same name in mid-Wales was meant. Mold was taken by King Henry II in 1167, and recaptured by the Prince of Gwynedd in 1201. In 1241, Dafydd ap Llywelyn yielded possession of the castle to the de Montalt family, but he returned in arms in 1245 and took it back.

In the summer of 1869 a riot occurred in the town[3] which had considerable effect on the subsequent policing of public disturbances in Great Britain.

On 17 May 1869, John Young, the manager of the nearby Leeswood Green colliery, angered his workers by announcing a pay cut. He had previously strained relationships with them by banning the use of the Welsh language underground. Two days later, following a meeting at the pithead, the miners attacked Young before frogmarching him to the police station.

Seven men were arrested and ordered to stand trial on 2 June. All were found guilty and the convicted ringleaders, Ismael Jones and John Jones, were sentenced to a month's hard labour. A large crowd had assembled to hear the verdict, and the Chief Constable of Flintshire had arranged for police from all over the county and soldiers from Chester to be present. As the convicts were being transported to the railway station the crowd grew restive and threw missiles at the officers. The soldiers opened fire on the crowd, killing four people[3] including one completely innocent bystander. Local author Daniel Owen's first novel, Rhys Lewis, published in instalments in 1882-1884, was heavily based on these events, though Owen strenuously denied the connection.

In and around the town

Celyn Farmers' Market is held on the first Saturday of every month in Mold (and on the third Sunday of the month in nearby Northop), for speciality and fresh local food.

Several producers in the Mold markets also appear regularly at the famous Borough Market in London.

Mold has a market every Wednesday and Saturday at which much fresh produce can be obtained.

The Mold Food & Drink Festival is held during September each year. The food festival has a central event area on the edge of the town centre, and many central and nearby businesses contribute to the event.

Mold achieved the status of "slow food town", the first town in Wales to do so.[4]