Moggerhanger is a village in Bedfordshire, sitting to the west of Sandy on the road to Bedford. it had a population of 636 at the 2001 census.

In the twentieth century the village name was spelled variously as: Moggerhanger, Mogerhanger (which remains the spelling used of the civil parish), Muggerhanger and Morehanger. Local pronunciation of the name is as Morhanger.

The parish church is St John the Evangelist. It is a Victorian church in French Gothic style, with stained glass windows. A community shop is held in vestry.

St John's was built in 1860 when the village, with the hamlet of Chalton, became a separate ecclesiastical parish. Before that, they had been hamlets in the parish of Blunham. 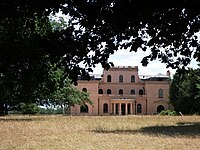 The parish includes the hamlet of Chalton which is mentioned in the Domesday Book where it is listed amongst the lands held by Adeliza, wife of Hugh de Grandmesnil, on behalf of The King. The land consisted of a mill, meadow for 10 ploughs and woodland for 16 pigs. This was said to be an outlying area of Potton which was held by the King's niece, Countess Judith.[1]

Moggerhanger House, a Grade I listed building designed largely by John Soane, is situated in the village.