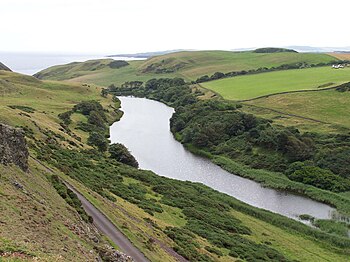 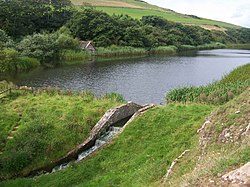 The outflow of Mire Loch

Mire Loch is a man made freshwater lake on St Abb's Head in Berwickshire, a mile northwest of the village of St Abbs. The loch lies on land owned by the National Trust for Scotland.

The lake is approximately 650 yards long by 55 yards at its widest point.

Mire Loch was originally an area of marshy land within the St Abbs Head Fault, which separates the hard volcanic rocks of St Abbs Head from the softer sedimentary rocks of the mainland. The glacial channel which follows the fault is marked by a distinctive inland valley across the Head which was fed by rainwater from the high ground on both sides and formed a boggy area which drained into the sea.[1]

Around the year 1900 it was decided to turn the boggy area into a recreation area. A dam was built to form a freshwater lake to be used for angling and waterfowl hunting. A nine hole golf course was also constructed nearby. The use of the golf course was discontinued many years ago although there is some visible evidence of the old greens and tees.

A boat house was built on the loch and this too has fallen into disrepair with most of the roof timbers now missing.

Today Mire Loch is a valued part of St Abbs Head National Nature Reserve providing a home for freshwater birds such as little grebe, reed bunting, heron, mute swan, moorhen and sedge warbler. The fringing vegetation which is composed mostly of high reeds provides shelter and food for nesting birds as well as for migrants in spring and autumn. In early summer hundreds of herring gulls and kittiwakes bathe in the loch.

In recent years the National Trust has planted almost a thousand trees around the loch in an effort to provide extra cover for migrant birds. Most of these trees have been planted on the southwest shore (in a plantation dedicated to a diver who died off St Abbs Head in 1981).[2]

Eels, perch and stickleback all live in the loch which is also a breeding site for frogs and toads.[3]

The loch has footpaths around its shores and walkers are encouraged by the Trust to include a circuit of the loch during their visit to St Abb's Head (although there is a warning that the paths can be quite muddy after rain). The loch has a stepped outflow which only runs for only several yards before disappearing down a man-made drain, finding its way underground to the North Sea which is just 500 yards to the southeast.