McDermott's Castle is a castle standing on Castle Island, an island of 0.57 acres in the southeast corner of Lough Key in County Roscommon. It is enrolled as a National Monument.

The Mac Diarmada were the ruling dynasty of Magh Luirg (Moylurg; north-eastern Connaught) from the 10th to 16th centuries. A castle stood on this island from the 12th century: in 1184, the Annals of Loch Cé report that a lightning bolt caused a fire:

The Rock of Loch-Cé was burned by lightning, i.e. the very magnificent, kingly residence of the descendents of Máel Ruanaid where neither goods nor people of all that were there found protection; where six score, or seven score, of distinguished persons were destroyed, along with fifteen men of the race of kings and chieftains, with the wife of Mac Diarmada, i.e. the daughter of Ó hEidhin, and his son's wife, i.e. the daughter of Domhnall O'Conchobhair, and the daughter of Ó Dubhda, and the son of Donnchadh O'Maelbhrenuinn, and the son of Donn O'Mannachain, and the two daughters of O'Mannachain, and Mac Maenaigh, chieftain of Fir Bolg
—Cenél-Builg, and the priest O'Maelbealtaine, and Gillachiarain Ó Connachtain, (i.e. a son of chastity and lamp of piety), and a countless destruction besides of good men; and every one of them who was not burned was drowned in this tumultuous consternation, in the entrance of the place; so that there escaped not alive therefrom but Conchobar mac Diarmata with a very small number of the multitude of his people.[1]

The fortress was later rebuilt and in 1235, Richard de Burgh, 1st Baron of Connaught attacked it during his conquest of Connaught. De Burgh besieged McDermott's Castle, first by a raft-mounted catapult, and then by fire ships. Cormac MacDermott, King of Moylurg, was forced to surrender.

A poem addressed to Tomaltach an Einigh mac Diarmata (King of Moylurg 1421–58) tells the story of the Hag of Lough Key who used (or abused) Cormac MacDermott's (king 1218–44) hospitality by staying on the Rock for a full year, and laid upon the McDermotts the obligation of perpetual hospitality.

The McDermotts lost the island in 1586. Eochaidh Ó hÉoghusa wrote a poem lamenting the castle's emptiness.[2]

In 2014, the island and castle featured in an episode of sitcom Moone Boy, as the residence of the mysterious "Island Joe." 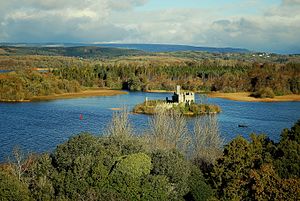 Isaac Weld, writing in 1832, describes as part of "the castle proper" two rooms, one above the other, each 36 × 22 feet, with walls 7½ feet thick. It is not clear whether this refers to part of the original castle, or the later construction.

Currently a folly castle built around 1800 by the King family stands on the island. It was built as a summer house and burned out during the Second World War.[4][5]