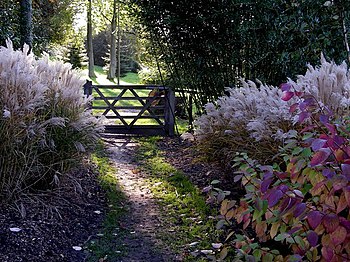 A path in the Arboretum

Marks Hall Gardens and Arboretum are found in the grounds that surrounded a Jacobean country house, Marks Hall, which was demolished in 1950. The estate is found some two miles north of Coggeshall in Essex.

The estate is now a popular visitor attraction. It has beautiful lakeside gardens and a renowned Arboretum with a collection of trees originating from every temperate area of the world. Growing in the arboretum are three ‘National Champions’ of their species (meaning the largest in the British Isles for either height, girth or both) and 110 Essex Champions. The national champions are a Forest Pansy (Cercis canadensis), a Jounama snow gum (Eucalyptus pauciflora subsp debeuzevillei) and a common walnut (Juglans regia 'Monophylla').

In 1605, Robert Honywood purchased Marks Hall from Deraugh's grandson, William, pulled down part of the old timber-framed house and built a new brick building in 1609.[1]

The estate then descended in the Honywood family to John Lamotte Honywood, who died by his own hand in 1694, and as he was childless, the estate was left to his cousin Robert. Robert, a Member of Parliament for Essex. Robert Honywood modernised the house until his death in 1735. Several generations later it passed to Frances Emma Honywood, who died unmarried at Marks Hall in 1895.[1] The estate was then sold.

Thomas Phillips Price (1844-1932), a landowner, mine owner, and Liberal politician, purchased Marks Hall and its deer park, at auction in 1898. He made provision in his Will to leave the Marks Hall estate to the nation in the interest of agriculture, arboriculture and forestry.[2]

During the Second World War, Earls Colne Airfield was built on the edge of the deer park and much of the property requisitioned for used as the headquarters for a number of local airfields. The American 97th Bombardment Wing headquarters was initially located at the manor. The house did not fare well in the War: by 1949, it was neglected and said to be in a dangerous state, and so the house was demolished in 1950.[2]

After the loss of the hall, the estate remained the site of its gardens and arboretum, owned by a dedicated charity, named 'Marks Hall'.[3][4]