Mansel Lacy (alternatively spelled Mansell Lacy) is a small village in Herefordshire. It is located seven miles north-west of Hereford, close to the A480 road. 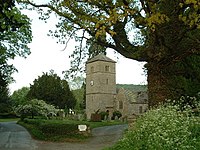 The parish church is St Michael and All Angels, which dates from between the 11th and 13th centuries.[1]

Mansel Lacy is mentioned in a surviving Anglo-Saxon charter from c. 1045, in which half a hide of which is bought as an estate.[2][3] It appears in the charter as Mælueshylle, probably meaning 'hill on which the mallow grows' from Old English malu hyll.[4]

The village has two entries in the Domesday Book (1086) as Malveselle in the hundred of Stepleset. It is quite small with only 11 households yet is assessed for a relatively large amount of tax of 5 geld units.[5]