Madley is a village in Herefordshire, located six miles west of the city of Hereford. The population of the civil parish at the 2011 census was 1,200.

Madley is believed to have been the birthplace of Dubricius, the 6th century evangelist of South Wales. He was born at Chilstone which is named after the 'Child Stone' that marked the spot.

The church is a fine mediæval edifice, which replaced the ancient church said to have been founded by St Dubricius. It is one of the best known local examples of Norman architecture with gargoyles carved into the tower itself. It is a Grade I listed building.[1]

The British Telecom's Madley Communications Centre is on part of the disused Second World War airfield RAF Madley.[2] It was built in 1940 by contractors and opened as a training centre for aircrew and ground wireless operators on 27 August 1941. In 1943 the grass airfield was reinforced with Sommerfeld Tracking and the centre's population rose to about 5,000. The site was visited in 1944 before D-Day by the American General George S. Patton. A later visitor was Rudolf Hess (who had been held prisoner near Abergavenny) on his way to the Nuremberg trials in 1946. Today only a few hangars remain. 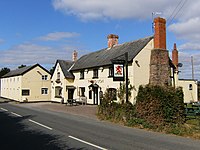 The Red Lion in Madley is an old coaching inn dating back to the 16th century and is a grade II listed building.[3] Here mail was delivered by mail coach from London and distributed to recipients in the locality.

The pub itself is built on a well which is situated under the hallway by the pub cellar. A stream also runs under the rear car park and flows under the land of the Red Lion Garage.

The Red Lion Garage was built in the 1940s by Johnathan Edwards and was run as a successful family business until 1986 when it was taken over by Tim and Martin Edwards (now deceased c.2006) and redeveloped in 2003. The old traditional butchers' shop in Madley was run by Herbie and Audrey Cresswell in the 1960s. It was later owned by Gordon Watkins and is now demolished with a garage on the site.