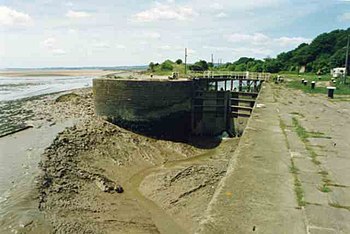 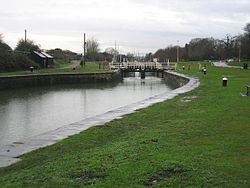 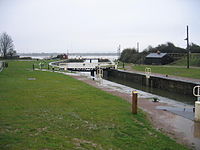 The Lydney Canal runs for just one-mile in Gloucestershire, coming inland from the River Severn to Lydney. It was opened in 1813 to trans-ship iron and coal from the Forest of Dean. It was once connected by a horse drawn tramroad to Pidcock's Canal [1] which brought materials down to the wharves by tub-boat.

In the 1960s imported wood was still being brought in by barge from Avonmouth.[2] It remained in commercial use until the 1980s. The entrance to the canal consists of an outer tidal gate opening into a wide basin. From there a lock opens into the one-mile canal cut. Immediately above the lock, a pair of gates point the other way as protection against a high tidal flood in the estuary. There is one swing bridge crossing the canal.

The docks have recently been restored to create a marina and harbour area for seagoing yachts and motor boats.[3]. As of 2020 the outer lock gates have failed in the open position and are inoperable. Consequently the harbour is becoming increasingly silted up from River Severn mud and is totally out of use. 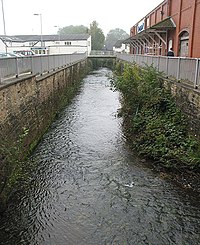 The Lyd rises in the Forest of Dean in the west of Gloucestershire, and runs southward to Lydney. From Lydney its course is canalised to become the Lydney Canal.