Lobley Hill is a village in County Durham; an urbanised location with a population of 6,199 at the 2011 Census.

Lobley Hill was the first place where industrial coal mining methods were used.

The area has a recently constructed park, called Watergate Forest Park, built on reclaimed land on the site of the former Watergate Colliery.

There are two churches in Lobley Hill:

There used to be a Methodist chapel on Beachwood Gardens, but this building has since been turned over to other use. 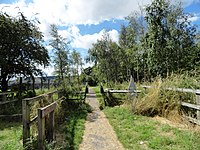