Leighton Bromswold, known locally as "Leighton", is a small village in western Huntingdonshire, found around 10 miles west of Huntingdon and 7 miles north of Kimbolton. It is a charming and compact little village in the hilly country between Huntingdon and the border with Northamptonshire.

The village has two features of particular interest: the moated gatehouse of the 15th Century and the parish church. The gatehouse and is the only part ever built of a great mansion designed by John Thorpe for the Duke of Lennox. 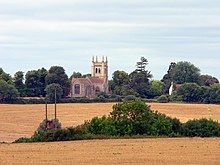 Leighton, over the fields

The village is recorded as Lecton in the Domesday Book, and later appears as "Leghton" and "Leghton upon Brouneswold" (14th century).[1] The addition of "Bromswold" serves to distinguish the village from Leighton Buzzard in neighbouring Bedfordshire. "Bromswold" is the ancient woodland of the area, from the Old English Brunesweald.

The village is on the ridge between the two brooks and contains some 17th-century timber framed and plastered houses. The village street lies along the road to Old Weston, with Sheep Street branching off to the north east to Duck End, and Leighton Hill to the south. The church stands at the south-east end of the village, with the Manor Farm, formerly called Church Farm, to the west. South east of the church is the site of the Prebendal Manor House where in the Middle Ages the original village was located. The church is Grade I listed, and there are seven Grade II listed buildings within the village. 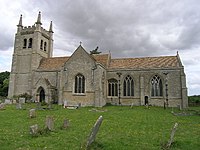 The parish church, St Mary's, is certainly one of the finest in the county, of striking early English design but after falling into near ruin was rebuilt in 1634 when the tower was added. The splendid furnishings of this period include the pulpit and reader's desk. St Mary’s is Grade I listed.

The church is not mentioned in the Domesday Survey of 1086. A chancel and an aisled nave were built about 1250, but this chancel was apparently rebuilt about 1310, and large transepts were added to the nave some forty years later. Probably the aisles were partly rebuilt and new windows inserted in them, and perhaps a clerestory added to the nave towards the end of the 15th century.

At the beginning of the 17th century the church was in a ruinous condition, and apparently about 1606 in the days of King James I work began to rebuild it; the south arcade and aisle were pulled down and the south wall of an aisleless nave and south porch built. The work, however, was stopped for lack of funds, and for twenty years the church was:

The roofs had fallen in, and the tower was in ruins as were the upper courses of the walls and the nave was roofless.

The church has two oaken pulpits, which both date from 1626 and of the same general design, set against the two responds of the chancel-arch. The reason for theire being two is that George Herbert's philosophy was that man should pray as well as preach.

It is generally believed that the west tower was built by the James, 6th Duke of Lennox in 1634 however there is no authority for this. James, Duke of Lennox, Earl of March, Baron Clifton of Leighton Bromwold was at the height of his powers in 1641 and it was probable that the tower was completed before or in that year. On the parapet are the initials 'R.D. 1641' probably made by Richard Drake a long-standing friend of Nicholas Ferrer. In 1655 it was recorded that 'Only the steeple could not be compassed wch afterwards the most Noble, Religious, worthy good Duke of Lenox did perform at his own proper cost & charges, to the Memorial of his Honor.'

Alongside the Lych Gate of St Mary's Church, Leighton Bromswold, stands the Leightonstone. It originally lay to the south east of the Church, where the village originally stood; to prevent its becoming lost or damaged it was moved a few hundred yards to its present location by the church gate together with a commemorative plaque and seating.

The Leightonstone is the ancient marker where may years ago the Moot Court of the Leightonstone Hundred once gathered to collect taxes and cast judgement of many local issues that were within the jurisdiction of the court.

This interesting earthwork, the site where Sir Gervase Clifton (died 1618) 'began to build a goodly house',1 is a grass field 600 feet by 300 feet, enclosed on three sides by large banks. It is all that was built of what was intended to be a grand mansion.

Just outside the village is existence of a hamlet now disappeared. The chapel of Salen is mentioned in 1248 and in 1299. In 1444 the sum of 16s. 8d. was paid 'pro le riggyng and redyng de la chapell, hall and le chaumbre' at Leighton Bromswold, but this is the last reference we have found to the chapel. From Thomas Norton's map of about 1660 we can see it was at the south-western angle of Salome Wood: the inclosure is still represented by a slight mound and ditch, and recent excavations have unearthed the foundations of the chapel, tiles, glazed pottery and much else besides.

The village has a social programme. In July 2011 the village celebrates its charter to run a fair by holding a street party. The charter was given by William, treasurer of King John, in 1211 obtained a charter for a fair to be held on the Feast of the Invention of the Holy Cross (3 May). There were later two fairs, one on May Day and the other on 24 September. Through the Leighton Bromswold Social Committee a number of other events are being held in 2011 they include Safari Supper, Cheese & Wine Evening, trip to the seaside, music festival, Halloween and Bonfire, Senior Citizens' Lunch and Children's Party.