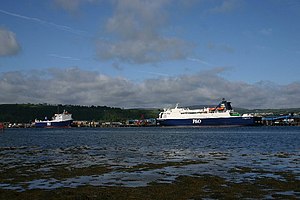 Ferries in the Port of Larne

Larne Lough is a sea lough or inlet on the coast of County Antrim. The lough is the water caught between the main body of County Antrim and the long peninsula Islandmagee. At its mouth is the town of Larne.

The lough is designated as an area of special scientific interest, a special protection area, and a Ramsar site to protect the wetland environment, particularly due to the presence of certain bird species and shellfish.

The lough takes its name from the small mediæval kingdom of Latharna meaning "descendants of Lathair". The older name for the lough was Loch Ollarbha or Inbhear nOllarbha, from Ollarbha the ancient name of the Larne Water.

Much of the estuary is shallow, having become extensively infilled with sediments of fine muddy sand, and at low water the largest areas of intertidal flats are exposed in the south of the estuary. The northern parts of the estuary are wider and relatively deep, especially at the mouth where dredging is regularly carried out to maintain the shipping channel to the port of Larne.

Previously, a complex spit system existed at the mouth of the estuary, formed where sediments from further along the shore were washed into the relatively calm waters of the lough. Very little evidence of these natural spits remain, as they were lost under port and industrial developments. In the upper reaches of the estuary at Ballycarry there is an area of salt marsh.[1]

The Chaine Memorial Tower lighthouse stands on the west side of the entrance to Larne Lough.

At Ballylig, Larne Lough, two dugout boats were found in peat which was overlaid with marine mud. The dugouts were radiocarbon dated 3641-3378 BC and 3700-3382 BC. Both were found close to a sea lough with no navigable rivers, so they were likely to have been used to travel at sea.[2]

In 1929, a "Coastal Survey" of the algae of the north-east of Ireland was begun when a few members of the Botanical Society in The Queen's University of Belfast investigated and mapped the distribution of the seaweeds. Among the algae recorded was Ascophyllum nodosum var. minor Turn.[3] The northern end was also surveyed.[4] The vegetation now is dominated by mid-upper salt marsh communities and a Phragmites reedbed, with some saltmarsh pans.[1]

The Larne Lough Ramsar site (wetlands of international importance designated under the Ramsar Convention), is 395.9 acres in area, at Latitude 54° 48' 54" N and Longitude 05° 44' 38" W. It was designated a Ramsar site on 4 March 1997. The Ramsar site boundary entirely coincides with both that of the Larne Lough Area of Special Scientific Interest and the Larne Lough Special Protection Area. The site qualified under Criterion 2 of the Ramsar Convention because it supports numbers of vulnerable and endangered Irish Red Data Book bird species. The site regularly supports nationally important numbers of breeding populations of Roseate terns and Common Tern. It also qualified under Ramsar criterion 6 due to populations occurring at levels of international importance of Light-bellied Brent Geese.[1] Swan Island has, in the recent past, held internationally important numbers of breeding Roseate Tern.[5]