Knockboy is a mountain of 2,316 feet on the border between the counties of Cork and Kerry. It is the highest peak in the Shehy Mountains and its summit, on the county border, is the highest point in County Cork.

The name of the mountain is from the Irish Gaelic language in which it is called An Cnoc Buí, meaning the Yellow Mountain.

Knockboy is composed of sandstone laid down in the Devonian period which was subsequently uplifted to form a mountain range, before being eroded into its present form by glaciers during the last ice age. 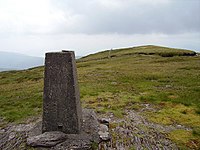 Trig point near the summit
Retrieved from "https://wikishire.co.uk/w/index.php?title=Knockboy&oldid=56465"
Categories: