King John's Castle is a 13th-century castle standing on King's Island in Limerick, County Limerick, next to the River Shannon.[1] Although the site dates back to 922 when the Vikings lived on the Island, the castle itself was built on the orders of King John in 1200. One of the best preserved Norman castles in Europe, the walls, towers and fortifications remain today and are visitor attractions.[2] The remains of a Viking settlement were uncovered during archaeological excavations at the site in 1900.[3] 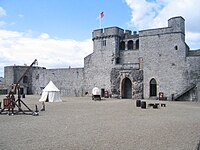 The Viking sea-king, Thormodr Helgason, built the first permanent Viking stronghold on Inis Sibhtonn (King's Island) in 922. He used the base to raid the length of the River Shannon from Lough Derg to Lough Ree, pillaging ecclesiastical settlements. In 937 the Limerick Vikings clashed with those of Dublin on Lough Ree and were defeated. In 943 they were defeated again when the chief of the local Dalcassian clan joined with Ceallachán, king of Munster and the Limerick Vikings were forced to pay tribute to the clans. The power of the Vikings never recovered, and they were reduced to the level of a minor clan, however often playing pivotal parts in the endless power struggles of the next few centuries.

The arrival of the Anglo-Normans to the area in 1172 brought dramatic change. Domhnall Mór Ó Briain burned the city of Limerick to the ground in 1174 in a bid to keep it from the hands of the new invaders. After he died in 1194, the Anglo-Normans finally captured the area in 1195 under Prince John, Lord of Ireland. In 1197, Limerick was given its first charter and its first Mayor, Adam Sarvant. A castle, built on the orders of King John and bearing his name, was completed around 1210.


The castle was built on the boundary of the River Shannon in order to protect the city from the Gaelic kingdoms to the west and from any rebellion by Norman lords to the east and south. Under the general peace imposed by the Norman rule, Limerick prospered as both a port and a trading centre, partly due to the castle acting as a watchdog on any cargo passing through the port of Limerick.[4] By this time the city was divided into an area became known as "English Town" on King's Island, while another settlement, named "Irish Town" had grown on the south bank of the river. The town of Limerick became so wealthy during this era King John set up a mint in the North West corner of the castle, with pennies and half pennies from this time available to see in Limerick museum today.[4] A 1574 document prepared for the Spanish ambassador attests to its wealth:

"Limerick is stronger and more beautiful than all the other cities of Ireland, well walled with stout walls of hewn marble... There is no entrance except by stone bridges, one of the two of which has 14 arches, and the other 8 ... for the most part the houses are of square stone of black marble and built in the form of towers and fortresses."

Luke Gernon, an English-born judge and resident of Limerick, wrote an equally flattering account of the city in 1620:

"a lofty building of marble; in the high street it is built from one gate to the other in one form, like the colleges in Oxford, so magnificent that at my first entrance it did amaze me."[5]

The walls of the castle were severely damaged in the 1642 Siege of Limerick, the first of five sieges of the city in the 17th century. In 1642, the castle was occupied by Protestants fleeing the Irish Rebellion of 1641 and was besieged by an Irish Confederate force under Garret Barry. Barry had no siege artillery so he undermined the walls of King John's Castle by digging away their foundations. Those inside surrendered just before Barry collapsed the walls. However, such was the damage done to the wall's foundations that a section of them had to be pulled down afterward.

Between 2011 and 2013, the castle underwent a massive redevelopment, with €5.7 million spent to improve the visitor facilities of the castle. Among the improvements were a brand new visitor centre, interactive exhibitions with computer generated animations, and a cafe with views onto the courtyard and the river.[6]