King Charles's Castle is a ruined artillery fort overlooking New Grimsby harbour on the island of Tresco in the Isles of Scilly, Cornwall. It was built between 1548 and 1551 to protect the islands from French attack, and as built it would have held a battery of guns and an accompanying garrison, designed to prevent enemy vessels from entering the harbour. The castle is polygonal in design, constructed from granite stone, with the gun battery at the front, and a dining room, kitchen and living accommodation at the rear. An additional defensive earthwork was constructed around it during the 17th century. The design of the castle is unusual for the period, and is only seen elsewhere in blockhouses along the River Thames.

The castle's design proved unsatisfactory, as its guns could not be angled so to fire down into the harbour, and its defences were considered vulnerable to attack. To mitigate this, an additional blockhouse was probably constructed below, closer to the water, but eventually a new fortification, the Star Castle, was built instead on the neighbouring island of St Mary's, which became the main fort in the Isles of Scilly.

In the aftermath of the Civil War, the Scilly Isles were held by the Royalist sympathisers of King King Charles I, who gave the castle its current name. The islands were then attacked by a Parliamentary force led by Sir Robert Blake in 1651, who landed on Tresco but bypassed the fort as he took the island. Its Royalist defenders blew up parts of the castle as they left, and some of its stone appears to have been used to build the newer Cromwell's Castle below it by the harbour.

Although King Charles's Castle was being used to house soldiers in 1660, by the 18th century it was described as ruinous. After 1922, the castle passed into the guardianship of the Ministry of Works, and archaeological excavations were carried out in 1954. Today the site is controlled by English Heritage and is open to visitors. It is protected as a scheduled monument and a Grade II* listed building.

King Charles's Castle was built between 1548 and 1551 to protect the Isles of Scilly against French attack.[1] Tensions with France had grown during the reign of Henry VIII and spilled over into war in 1538.[2] Henry initially responded by fortifying the coasts of England, constructing new artillery forts designed to defend against the longer-range cannons that were becoming common in the 16th century.[2] Henry's son, the nine-year-old Edward VI, inherited the throne in 1547, facing renewed war with France.[2] Thomas Seymour, the Lord Admiral,[3] inspected the Scilly Isles personally and concluded that they were vulnerable to a French invasion.[3]

The interior of the hall

Sir Francis Fleming, the Lieutenant-General of the Ordnance, was tasked in February 1558 with improving the defences on the islands.[3] His work initially focused on the island of Tresco and was carried out under the direction of John Killigrew, the captain of Pendennis Castle in Falmouth.[4] Tresco was in need of modern defences, but Killigrew also wanted to use the work programme to increase his political influence on the island.[5]

The resulting castle was positioned on the high ground of Castle Down to protect New Grimsby harbour, overlooking its narrow, northern entrance.[6][7][8] It would have held a battery of guns and an accompanying garrison, designed to prevent enemy vessels from entering the harbour.[9]

After Edward Seymour fell from power in 1549, a new survey was carried out by Captain William Tyrell. Building work across the Scilly Isles continued, expanding to include the neighbouring island of St Mary's.[10] At least 540 oak trees from South Wales were dispatched to the islands in early 1550, as the islands lacked suitable sources of timber of their own.[10] Orders were given in 1551 to send bows, arrows and the ingredients required to make gunpowder to the islands, where construction teams were kept at work throughout 1552.[11]

The Old Blockhouse appears to have been completed, but shortage of money stopped any further work in the islands. King Edward's successor, Queen Mary I, intended to establish a garrison of 150 soldiers on the islands, but it is uncertain if she did.

It soon became evident that 'the Castle of Tresco' had been poorly sited,[7] 130 feet above sea level and unable to direct fire into the harbour, so by 1554, a small blockhouse had been built beneath the castle on the future site of Cromwell's Castle.

Francis Godolphin, then the tenant of the island, complained that "it neither discovereth the whole harbour so through the iminent height thereof can make no good shot so steep downwards", and also complained about its fortification, "which is worst, is of so weak form as it cannot be defended".[12] Star Castle was therefore built on St Mary's between 1593 to 1594; a more modern, well-positioned design, Star Castle rapidly became the key defensive site in the Isles of Scilly.[13][7]

In the Civil War, the islands held out for the King and Royalists on Tresco appeared to have believed that King Charles's Castle was a critical defensive point on the island. They may have built new earthwork defences around the castle to defend it against an attack from the land,[14] though it is possible that these works from around 1627.[8] During this period the castle was given its current name.Cite error: Closing </ref> missing for <ref> tag Taking the harbour of Old Grimsby in an amphibious assault on 18 April, he then simply bypassed King Charles' Castle and marched south, using Tresco as a basis for then taking the neighbouring island of St Mary's.[15][16] The Royalist commander of the castle, William Edgecumbe, retreated from the castle on 19 April and the defenders blew up part of the site as they left.

Some of the castle's stonework appears to have been reused in the construction of the new Cromwell's Castle by the Parliamentarians, just beneath King Charles's Castle.

The antiquary William Borlase was critical of the castle—by then in ruins—during his 1752 visit, describing it as a "work of labour and expense, rather than of skill", and attributing its abandonment to its poor military utility.[17] The writer John Troutbeck, commenting at the end of the century, took a similar perspective, praising the thickness of the walls, but noting that it was ill-positioned to fire into the harbour, unlike its replacement below.[18]

In 1922, Arthur Dorrien-Smith, who held the lease of the islands form the Duchy of Cornwall, agreed to pass several properties on Tresco, including the castle, into the guardianship of the Ministry of Works.[19] The castle was partially excavated in 1954, uncovering coins, pottery and a buckle.[20] Parts of the first floor of the battery were reconstructed from the fallen stonework uncovered during the dig.[21]

In the 21st century, the blockhouse is controlled by English Heritage, the successor to the Ministry, and open to tourists.[22] It is protected as a scheduled monument and a Grade II* listed building.[20] 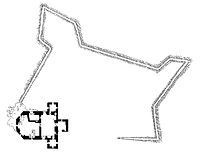 The castle and its earthworks

King Charles's Castle is a polygonal stone building, composed of a gun battery on one side and living quarters on the other. On the west side, overlooking the sea, is a large room which originally contained the battery, with embrasures for five guns.[23] At some point after its initial construction, the north-east gun embrasure was blocked by the construction of an internal chamber within the gun battery, 15 feet by 8 feet, with the embrasure being opened up to form a window.[23]

Behind the battery is a large room, 29 feet by 20 feet, forming a hall and kitchen, originally for the use of the garrison and containing a fireplace and oven.[24][7] The room has two bedrooms leading off it, each 10 feet square.[25] The north bedroom may have been heated by a small brazier.[26] A guardroom, 10 feet square, forms the entrance to the building, leading into the hall.[25]

The castle is made from dressed and rubble granite, incorporating an underling rocky outcrop into the design in the north-west and south-west corners. In places the walls survive up to 11 feet high and 5 feet thick, but are on average only 5 feet tall and 3 feet thick.[8]

Architecturally, the castle is unusual for this period.[12] Its design appears somewhat backward, particularly in comparison to the nearby fortification of Harry's Walls, built at the same time as the castle, but which adopted a more contemporary design that employed bastions.[22] Its closest equivalents are the blockhouses built by Henry VIII on the River Thames.[12]

The castle is surrounded by a rectangular earthwork, probably built in 1627, and similar to that at Sandsfoot and Pendennis Castles. It stretches away north-east from the castle, with an earth and rubble bank up to six feet high and 25 feet wide, with a bastion and demi-bastion at its corners and a ditch, up to 1.3 feet deep and 10 feet wide along the north and east sides.[27]

Another line of earthworks survives around 40 yards south-east of these earthworks; its bank is a foot high, with a ditch up to a foot and half deep.[28][7]National Heritage List 1016181: Oliver's Battery, Tresco</ref> It lies just behind the crest of the hill, possibly for concealment, and is defended with bastions and orillons although it appears not to have been finished.[28] It probably dates from the mid-16th century, possibly having been built at around the same time as the castle.[28]