Kimbolton Castle stands in Kimbolton in Huntingdonshire. It is best known as the final home of King Henry VIII's first queen, Catherine of Aragon. Originally a mediæval castle but converted into a stately palace, it was the family seat of the Dukes of Manchester from 1615 until 1950. It now houses Kimbolton School.

A wooden motte and bailey castle was built in Kimbolton, on a different site, in Norman times. Later, King John granted Geoffrey Fitz Peter, Earl of Essex permission to hold a fair and market in Kimbolton, as a consequence of which a market place was created, with the existing church at one end and a new castle at the other. No remains of this castle (most likely a fortified manor house) remain, although it was built on the site of the present castle.

The castle went through various phases of ownership until, by the 1520s, it belonged to the Wingfield family. The mediæval castle was rebuilt as a Tudor manor house, parts of which survive. Catherine of Aragon was sent to Huntingdonshire for refusing to give up her status or deny the validity of her marriage, and detained in Buckden Towers; she was transferred to Kimbolton Castle in April 1534. The fenland climate damaged her health, and she died here in January 1536. Her body was carried in procession to the Peterborough Abbey (now Peterborough Cathedral). One tale has it that she haunts the castle.

Earls and Dukes of Manchester 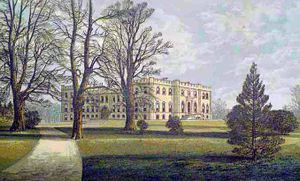 The castle was bought in 1615 by Sir Henry Montagu, later 1st Earl of Manchester. His descendants owned the castle for 335 years until it was sold in 1950.

Charles Edward Montagu, the 4th Earl who was created 1st Duke of Manchester in 1719, had many works of reconstruction carried out between 1690 and 1720. Sir John Vanbrugh and his assistant Nicholas Hawksmoor redesigned the facades of the castle in a classical style, but with battlements to evoke its history as a castle, the portico was later added by Alessandro Galilei. The Venetian painter Giovanni Antonio Pellegrini redecorated some of the reconstructed rooms in 1708, including the main staircase and the chapel. Rich, gilded furnishings in a Louis XIV-inspired style were commissioned from French upholsterers working in London.

For a later duke, Robert Adam produced plans for the castle gatehouse and other garden buildings, including an orangery. Only one of these buildings, the gatehouse, was constructed in around 1764. Mews buildings were added to provide stables, and an avenue of Giant Sequoias was planted in the 19th century.

The castle was used by the Royal Army Medical Corps during Second World War.

The 10th Duke of Manchester sold the castle to Kimbolton School in 1950. The furnishings were scattered in sales and some have come to national collections. There is limited public opening during the school holidays and at weekends.

On the grounds of the castle is Warren House, a former warrener's lodge converted into a late 18th-century folly on command of one of the castle's inhabitants to add interest to his horizon, complete with a single decorative facade facing the castle; it is grade II* listed and owned by the Landmark Trust. In 2011, the Trust started renovating the house, under a design from architect Oliver Caroe.[1] The renovation was completed in 2012.