Kilternan , also known as 'Kiltiernan', is a village in County Dublin, in the south of the county, in the foothills of the Wicklow Mountains, near the border with County Wicklow.

The name of the village is from the Irish Cill Tiarnáin, meaning 'Church of Tiarnán'.

Kilternan is separated from the continuous built-up Dublin area, in rural surroundings at the crossroads of the R117 and R116 regional roads. 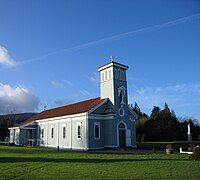 Our Lady of the Wayside

Kilternan's most notable buildings are the Church of Ireland Parish Church of Kilternan which dates from 1826, the timber-built Roman Catholic Church of Our Lady of the Wayside (dedicated on 14 July 1929), or 'The Blue Church', and the former Golden Ball now branded as "Farmer Browns" pub.

Spelling of the name

Road signs are somewhat confused regarding the correct spelling of the name of the area. For example; signs on the M50 motorway (Junction 15) call it Kilternan while signs at the junction on the adjoining roads refer to Kiltiernan, even though both sets were erected at roughly the same time. Local government documents and ordnance survey maps refer to Kiltiernan while many local people spell the name without the "i". Locally, Kilternan is the most accepted form.

Ireland's only (artificial) ski slope is here too.