Killingworth, formerly Killingworth Township, is a town in Northumberland, to the north of Newcastle upon Tyne and within the conurbation growing from it.

Killingworth was built as a planned town in the 1960s,[1] next to Killingworth Village, which existed for centuries before the Township. Other nearby towns and villages include Forest Hall, West Moor and Backworth.

Most of Killingworth's residents commute to Newcastle, or its surrounding towns, but Killingworth has developed a sizeable commercial centre of its own.

Documentary evidence for Killingworth starts in 1242 when it is recorded as part of the land held by Roger de Merlay III. There were nine recorded taxpayers in 1296, falling to eight by 1312. In a survey of the township dated 1373 listed sixteen tenements (holdings).[6] The township was divided into more than twenty named fields. Within each field the various landholders farmed strips, or selions, of land. Fifteen landholders are mentioned as holding tenements in Killingworth and strips of land scattered among the fields. One of the fields mentioned is Dimisdale (Dymmyngesdale). This name survived until the 18th century and can be identified with the lands abutting Burradon township.

An Inclosure Act for the parish was obtained in 1793.[7] Some common land remained: 1,800 acres formed Killingworth Moor. Before enclosure, Newcastle races were held on the moor from the early 17th century. Racing eventually transferred to Newcastle Town Moor.[8]

On 13 March 1828 the main landowner, Henry Utrick Reay, died in London. His eldest daughter and heiress Elizabeth Anne married Matthew Bell of Woolsington and they were to live in Killingworth Hall. Matthew served as a Member of Parliament.

The 1841 Census recorded a population of 112 spread through 14 dwellings. The village consisted of two rows of cottages on both sides of the road. By the mid-nineteenth century a terrace had appeared, possibly connected with the developing mines in Killingworth and surrounding areas. To the north farms persisted. This pattern of development with 18th and 19th century stone buildings is identifiable today, though with recent infilling.[6]

Killingworth was home to a number of pits including the world-famous Killingworth Colliery. In 1814 George Stephenson, enginewright at the colliery, built his first locomotive Blücher with the help and encouragement of his manager, Nicholas Wood, in the colliery workshop behind his house "Dial Cottage" on Lime Road. This locomotive could haul 30 tons of coal up a hill at 4 mph. It was used to tow coal wagons along the wagonway from Killingworth to the Wallsend coal staithes. Although Blücher did not survive long, it provided Stephenson with the knowledge and experience to build better locomotives for use both at Killingworth and elsewhere. Later he would build the famous Rocket in his locomotive works in Newcastle.[9]

At the same time Stephenson was developing his own version of the miner's safety lamp, which he demonstrated underground in Killingworth pit a month before Sir Humphry Davy presented his design to the Royal Society in London in 1815. Known as the Geordie lamp it was to be widely used in the Northumberland and Durham pits in place of the Davy lamp.[10]

Construction of Killingworth, a new town, began in 1963. Intended for 20,000 people, it was a former mining community, formed on 760 acres of derelict colliery land near Killingworth Village. The building of Killingworth Township was undertaken by the council: it was not formally a 'New Town' sponsored by the Government. 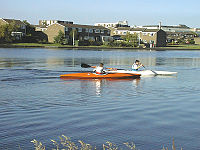 Killingworth's planners adopted a radical approach to town centre design, resulting in relatively high-rise buildings in an avant-garde and brutalist style that won awards for architecture, dynamic industry and attractive environment. This new town centre consisted of pre-cast concrete houses, with millions of small crustacean shells unusually embedded into their external walls, 5 to 10 storey flats, offices, industrial units and service buildings, which often consisted of artistic non-functional characteristics, shops and residential multi-storey car parks, interconnected by ramps and walkways. These made up a deck system of access to shopping and other facilities, employing the Swedish Skarne method of construction.[11]

Originally named Killingworth Township, the latter part was quickly dropped through lack of colloquial use. Killingworth is referred to as 'Killy' by many residents of the town and surrounding areas.

Around 1964, during the reclamation of the derelict pit sites, a 15-acre lake south of the town centre was created; spoil heaps were leveled, seeded and planted with semi-mature trees. Today, swans, ducks and local wildlife live around the two lakes, which span the main road into Killingworth. The lake is kept well stocked with fish and an angling club and model boating club regularly use it.

The concept was to create community interaction, with large parks in the grasslands around the towers and adult social clubs. The design did not live up to expectations and the estate started to look and feel like a prison rather than a castle with the introduction of measures to stop anti-social behaviour from youths congregating within the tower instead of in the parks.

Grating was retrofitted to prevent risk takers sliding down the 100 ft high girders holding up the walkways. Cast iron grills were erected to stop transit by over-exuberant youths racing bikes and skateboards along the smooth walkway "racetrack". Dogs fouled the walkways, rubbish chutes were blocked, vandals damaged communal bins, stairwells, lifts and multi-storey residential car parks joined the list of problems. The Towers were never widely popular and were demolished in 1987.[12]

The last remaining eyesore, the walkway to the shops, was eventually demolished as it served no purpose after the Towers' demise, but it stood alone for 10 years until funds were found to bring it down.