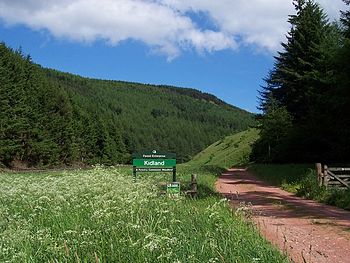 The Kidland Forest is a planted forest in northern Northumberland, amongst the Cheviot Hills.

The forest was planted between 1953 and 1987 on what was once bare, open country. This forest today overspreads a twisted landscape of hills and dales watered by the burns which join together to create the River Alwin.

Today the Kidland Forest extends to some 5,190 acres of land, of which 2,965 acres are in the ownership of the Forestry Commission and the rest in private ownership.

The highest of the fells in the Kidland Forest is Cushat Law (2,018 feet), one of only six Cheviot hills above 2,000 feet. Also within the forest is Bloodybush Edge (2,001 feet).

The forest is subject to commercial, sustainable forestry. The forest was planted mainly with Sitka spruce, but also with other native species such as Scots pine, Japanese larch, Norway spruce, Lodgepole pine and European larch.

The forest has a population of red squirrels, which have disappeared in most of the British Isles. There are also black grouse.

Sights within the forest

The remains of Memmerkirk, a mediæval chapel is found in what is now the midst of the forest, at theh junction of the Yoke Burn and Sting Burn collide. The chapel was built by the monks of Newminster Abbey for use at the shieling s in the hills. A local story tells of a monk who occupied himself making bee-skeps, making one each day of the week so it was easy for him to remember which day it was and to tell when the Sabbath came along. However, on one occasion he misplaced a skep and when he should have been ready to celebrate mass he was hard at work He was astonished, therefore, when his little congregation from the hills arrived at the chapel.[1]

Before the plantation of the forest, these hills were high pasture, and a number of shepherds cottages are found in the forest. Those at Milkhope and Whiteburnshank serve today as outdoor centres and another on the Usway Burn as a holiday let.

The Alwinton Fell Race is run over 14 miles in the Kidland Forest, a race first run in 1986. It begins in the village of Alwinton and runs up the ancient drove road known as Clennell Street over the hills and down to the River Alwin's valley before a climb back up and to finish at Alwinton.

Though a working forest, the Forestry Commission has established a network of public paths through the forest, often remote from public roads.

One path closer to public access is 3 mile circle route from Clennell along the banks of the River Alwin to Kidlandlee Dean at the southern fringe of the forest.