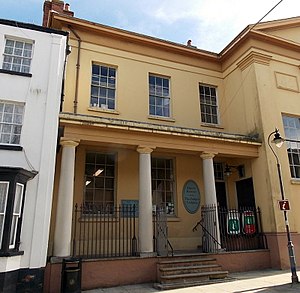 The Judge's Lodging is a prominent nineteenth century former court house in Presteigne in Radnorshire, which today serves as an unusual museum.

The building was opened in 1829, containing a court room, accommodation for visiting assize judges (hence the name), and also to accommodate the administrative business performed by the Justices of Radnorshire, and thus it served as both the judicial and administrative centre of the county.

The museum displays the life of the courts as they were in the Victorian heyday: the judge's apartments themselves contrasting starkly with the damp cells beneath, along with servants' quarters and displays of the courts in operation.

The original judicial centre of Radnorshire was Rhayader. However the latter town fell out of favour after a judge was murdered there in the 1530s, and in 1542 the decision was made to shift the county town to Presteigne. The Court of Great Sessions met here from that year, and continued until the replacement of that Court with the Courts of Assize in 1830. Both the Assize judges and the justices of the peace sat at Presteigne.

There was a Shire Hall serving as a court room, a lodging house for the judges and a gaol, but the Shire Hall fell into a dangerously dilapidated state, as did the gaol, frequently broken out of.

Administrative business left the town in 1889 for Llandrindod Wells, the new rising town, but the assize courts remained in Presteigne until October 1970, and the magistrates court until the 1990s, when the increasingly dilapidated state of the building became a concern.

The court was closed but soon moves began to restore it. In 1997 the building was reopened, as a museum.