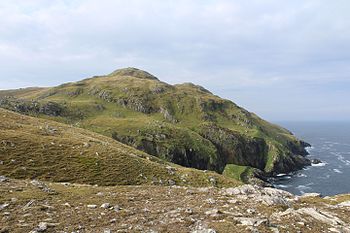 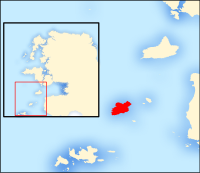 Inishturk, with its neighbouring Mayo islands

Inishturk is an inhabited island off the coast of County Mayo. Its name is from the Irish language Inis Toirc, meaning Wild Boar Island. It has a permanent population of about seventy people. There are two main settlements, both on the more sheltered eastern end of the island, Ballyheer and Garranty. Bellavaun and Craggy are abandoned settlements. There is a regular ferry from Roonagh pier near Louisburgh. Some inhabitants are descended from evacuees from Inishark to the south-west. The social club Mountain Common is situated on the hill that separates the two settlements. The British built a Martello tower on the western coast during the Napoleonic Wars. Inishturk has the highest per-capita donation rate towards the RNLI in the whole of Ireland.