Ightham Mote (pronounced "item moat") in Kent is a mediæval moated manor house close to the village of Ightham, near Sevenoaks.

Ightham Mote and its gardens are owned by the National Trust and open to the public. The house is a Grade I listed building, and parts of it are a Scheduled Ancient Monument. 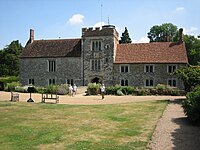 Ightham Mote: the gatehouse rebuilt in the 1480s

Originally dating to around 1320, the building's importance lies in the fact that successive owners effected relatively few changes to the main structure, after the completion of the quadrangle with a new chapel in the 16th century. Nikolaus Pevsner called it "the most complete small mediæval manor house in the country", and it remains an example that shows how such houses would have looked in the Middle Ages.

Unlike most courtyard houses of its type, which have had a range demolished, so that the house looks outward, Nicholas Cooper observes that Ightham wholly surrounds its courtyard and looks inward, into it, offering little information externally.[1] 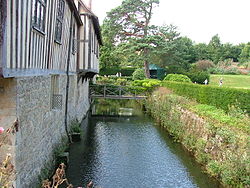 The moat of Ightham Mote

There are over seventy rooms in the house, all arranged around a central courtyard. The house is surrounded on all sides by a square moat, crossed by three bridges. The earliest surviving evidence is for a house of the early 14th century, with the Great Hall, to which were attached, at the high, or dais end, the Chapel, Crypt and two Solars. The courtyard was completely enclosed by increments on its restricted moated site and the battlemented tower constructed in the 15th century. Very little of the 14th century survives on the exterior behind rebuilding and refacing of the 15th and 16th centuries.

The courtyard, gatehouse at left

The structures include unusual and distinctive elements, such as the porter's squint, a narrow slit in the wall designed to enable a gatekeeper to examine a visitor's credentials before opening the gate. An open loccia with a fifteenth-century gallery above, connects the main accommodations with the gatehouse range. A large kennel was built in the late 19th century for a St Bernard named Dido is the only Grade I listed dog house.

A rumour is circulated that during the 19th century a female skeleton was found walled up behind a blocked service door. The door was shown by the Time Team special No. 21 and was actually a closet. There are no records of a skeleton being found and the rumour has not been entered into the 2004 tour booklet. 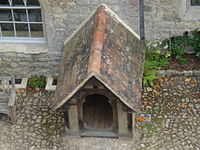 The Grade I listed dog kennel

The house remained in the Selby family for nearly 300 years. Sir William Selby bought the house from Charles Allen in 1591. He was succeeded by his nephew, also Sir William, who is notable for handing over the keys of Berwick-upon-Tweed to James VI of Scotland on his way south to succeed to the English throne. Sir William married Dorothy Bonham of West Malling but had no children.

The Selbys continued until the mid-19th Century when the line faltered with Elizabeth Selby, the widow of a Thomas who disinherited his only son. The house passed to a cousin, Prideaux John Selby, a distinguished naturalist, sportsman and scientist. On his death in 1867, he left Ightham to a daughter Mrs Lewis Marianne Bigge. Her second husband, Robert Luard, changed his name to Luard-Selby. She died in 1889 and the executors of her son Charles Selby-Bigge, a Shropshire land agent, put the house up for sale in July 1889.

The Mote was purchased by Thomas Colyer-Fergusson. He brought up his six children at the Mote. In 1890-1891, he carried out much repair and restoration, which allowed the survival of the house after centuries of neglect. He converted a lumber room into a billiard room, added bathrooms and central heating, reorganised the kitchen and dining areas and carried out countless repairs. Ightham Mote was opened to the public one afternoon a week in the early 20th century.
Sir Thomas Colyer-Fergusson's third son, Riversdale, died aged 21 in 1917 in the Third Battle of Ypres, and won a posthumous Victoria Cross. A wooden cross in the New Chapel is in his memory. The oldest brother, Max, was killed at the age of 49 in a bombing raid on an army driving school near Tidworth in 1940. One of the three daughters, Mary (called Polly) married Walter Monckton.
During the Second World War, the reduced staff slept in the crypt to shelter from air-raids, and a German pilot was held there for a single night after parachuting onto the estate from his stricken plane.


On Sir Thomas's death in 1951, the property and the baronetcy passed to Max's son James, a lifelong bachelor. The upkeep and repair of the house left him in no option but to sell the house and auction most of the contents. The sale took place in October 1951 and lasted three days. It was suggested that the house be demolished to harvest the lead on the roofs, or be divided into flats. Three local men banded together to save the house purely for love of it: William Durling, John Goodwin and John Baldock. They paid £5,500 for the freehold, confident that some other, richer, benefactor would emerge.

In 1953, the house was purchased by an American resident, Charles Henry Robinson of Portland, Maine, a bachelor. He could stay for only fourteen weeks a year for tax reasons. He made many urgent repairs, and partly refurnished it with 17th-century English pieces. In 1965, he announced that he would give Ightham Mote and its contents to the National Trust. He died in 1985 and his ashes were immured just outside the crypt. The National Trust took possession in that year.

In 1989, the National Trust began an ambitious conservation project that involved dismantling much of the building and recording its construction methods before rebuilding it. The project ended in 2004 after uncovering numerous examples of structural and ornamental features which had been covered up by later additions. It is estimated to have cost in excess of £10million.