Horndon-on-the-Hill is a village and ancient parish in the Barstable Hundred of Essex. It is located close to the A13 road, around one mile north-west of Stanford-le-Hope and around two miles north-east of Orsett.

Horndon-on-the-Hill has one church, the Church of St Peter and St Paul, which dates from the 13th century and is Grade-I listed.[1] It also has a primary school, a recreational park and two public houses, The Swan and The Bell.

Horndon-on-the-Hill appears in the Domesday Book of 1086 as Horninduna, meaning "horn-shaped hill".[2] It may have been the site of the 11th-century Horndon mint, based on the survival of a single Anglo-Saxon penny from the village.

In the late 15th century, the lord of the manors of Arden Hall and Horndon House was Sir Edmund Shaa. Shaa was a supporter of Richard III and was knighted by him.[3] These manors remained in the Shaa family for several generations before passing to the Pooley family.

A woolmarket was established in the village in the early 16th century; the building later became a shelter for the poor people of the area.[4]

On the south wall of the church is a memorial to Thomas Higbed, who was burned at the stake in Horndon in 1555 and is included in Foxe's Book of Martyrs.[5]

Horndon-on-the-Hill was designated a conservation area in September 1969.[6] 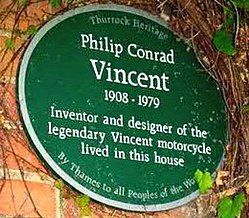