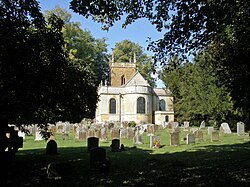 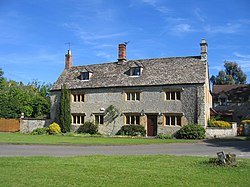 A typical house in Honington

Honington is a hamlet and parish in the Kington Hundred of Warwickshire. It is in the Brailes division of the hundred, approximately two miles north of Shipston-on-Stour. The population taken at the 2011 census was 250.[1] The River Stour flows past the village on the western side and has a 5-arched 17th-century bridge crossing it.

Honington contains approximately 60 houses within the parish boundary, including the half-timbered Magpie Cottage, and Shoemaker's Cottage situated on the Green opposite the gates and lodge entrance to Honington Hall which was built in 1682 by Sir Henry Parker.

The Church of All Saints church has been re-built, but retains a 13th-century tower.

This Warwickshire article is a stub: help to improve Wikishire by building it up.
Retrieved from "https://wikishire.co.uk/w/index.php?title=Honington,_Warwickshire&oldid=73769"
Categories: