Hayes is a town and ancient parish in metropolitan Kent, to the south of Bromley.

The name Hayes is recorded from 1177 as hoese from the Anglo-Saxon meaning "a settlement in open land overgrown with shrubs and rough bushes".[1][2] The village stood at the junction of Hayes Lane, leading north to Bromley (one mile distant), and what is now known as Pickhurst Lane, leading west to West Wickham. The centre of the old village is now called Hayes Street. The village school was here, as is the parish church of St Mary the Virgin. Parts of the church date back to the thirteenth century; however it was subject to heavy restorations by George Gilbert Scott and John Oldrid Scott in the nineteenth century.[3] The public house, also on Hayes Lane, is called "The George". Hayes Street Farm, still shown on modern maps, is to the north of the village centre.

Both William Pitt the Elder, 1st Earl of Chatham (1708–1778), and William Pitt the Younger (1759–1806) lived at Hayes Place.[4] The house was demolished in 1933 and the site redeveloped, but its occupants are remembered in such road names as Chatham and Pittsmead Avenues. Prior to being demolished, Hayes Place was owned by the Hambro family and a couple of roads bear the family names.

Although the parish church of Hayes can trace its history back over 800 years, and local villains joined Jack Cade in his rebellion of 1450, the story of Hayes became significant a little over a century ago, when Hayes became a popular place in which to live because bankers, stockbrokers and those who were "something in the City" bought property in the area.[5]

The branch railway from Elmers End, originally known as the West Wickham and Hayes Railway, was opened on 29 May 1882.[7] Hayes station is a terminus.

During the second world war an anti-aircraft gun was locally homed on Hayes Common and the Canadian soldiers who manned it were barracked in local homes.[8] 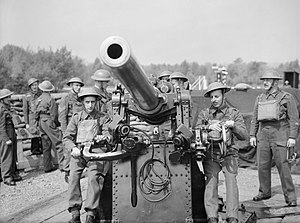 Throughout the 20th Century the Hayes village area continued to grow and thrive, with further commercial development on Station approach in response to the increased traffic through the railway terminus driving an incentive for growth. In the old village area ('Old Hayes'), the former village school converted to a second, smaller village hall when the local primary school opened in 1937;[9] it lies along George Lane, which was further expanded around the same time to facilitate further suburban housing developments.

To cope with the increase in commuter traffic the station was rebuilt in 1935, and Station Approach became the main shopping area,[10] containing a Post Office, petrol station, two mini-supermarkets and numerous small shops. It also contains a public house called The New Inn.

Much of the area to the west and north-west of the original village has been taken over by suburbia. West Wickham and Bromley are completely joined with Hayes; and Coney Hall estate, beyond the Orpington - Croydon road is also part of the pattern. To the east and south, however, the open space of Hayes Common precludes building of any kind.

The old village area along Hayes Street, also known as 'Old Hayes', today contains some small shops, though the local post office closed in 2004 (the nearest is now in the main shopping area near the station). The timbered cottage on the eastern side of Hayes Street was a newsagents called "The Walnut Tree" until 2006 when it reverted to residential use. The former village school remains a second village hall; the local primary school in George Lane has expanded in size in recent years and now has three class groups in each year. It is extremely popular and many of its pupils go on to Hayes School in West Common Road.

The shopping area in Old Hayes functions as a second hub for commercial businesses, running along Hayes street opposite the church building. It consists of the public house, "The George", a mini-market, several hairdressers, a cycle shop and two off-licences. Next to the church is the village public library, occupying the old rectory building (since replaced by the new rectory), and is surrounded by the library gardens, a small area of parkland containing tennis courts.

Hayes Street Farm continues to play an important role in the village setting. Several public pathways and popular walking routes run through the farmland, and regular car boot sales are hosted on the farm fields.

There is a group called Hayes Village Association (HVA) which meet regularly to inform people about local issues. They regularly liaise with Bromley Council on planning matters and they give a voice to residents and businesses on a variety of issues. HVA produce a quarterly magazine with local interest articles and events, as well as details of businesses in the locality.

There are numerous playing fields and sports grounds around the periphery of Hayes: such as the Metropolitan Sports Ground at the Warren. It is also home, since 1927, to the world famous Blackheath Harriers Athletics Club (now Blackheath and Bromley Harriers Athletic Club) at their clubhouse The Sydney Wooderson Centre.

Hayes Rail Station provides good links to south-east London and The City, being the terminus of the Hayes Line. Regular services from the station terminate at either Charing Cross or Cannon Street via Elmers End (interchange with Tramlink), Lewisham (interchange with DLR), New Cross (interchange with Overground) and London Bridge.