Hawton is a tiny village in Nottinghamshire, sitting immediately south of Newark-on-Trent, separated only by a few hundred yards of fields. It is a village of just 70 souls, beside the River Devon, all in the broad plain of the Trent.

Hawton played an important part in the Civil War as a Roundhead encampment against the Royalist stonghold in Newark, and the earthworks of the Parliamentarians' redoubt are still visible within the village.[1]

The village is most famed for the parish church of All Saints, built in the 14th and 15th centuries. The early 14th century saw the first building (on an earlier site) by the de Compton family. Sir Thomas Molyneux added the clerestorey and also the tower which boldly overlooks the Trent floodplain. A branch of the Molyneux family, originally from Lancashire, lived at Hawton for many centuries.[2] 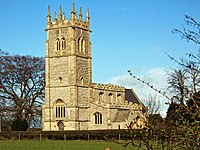 All Saints' Church is the Church of England parish church. It is Grade I listed as a building of outstanding architectural or historic interest.

The church is mediæval and the chancel is described by Nikolaus Pevsner as one of the most exciting pieces of architecture in the country..[3]

On the north side of the chancel is a mediæval Easter Sepulchre. Opposite on the south side is the sedilia. The carvings on these two features are considered amongst the best in Britain.[4] The carvings in the chancel are thought to be the work of stonemasons who worked on the choir screen and Chapter House in Southwell Minster.

Most famous is the Easter Sepulchre, which would have been used to reserve the consecrated bread and wine between Maundy Thursday and Easter Day, during which period there would have been no celebration of Holy Communion, and the consecrated elements would have been reserved in the Sepulchre. The carvings depict at the base the sleeping Roman soldiers guarding the tomb of Christ, at the top are the apostles gazing havenward at his ascending feet. In between is the risen Christ, the graveclothes draped over his shoulder. Sadly the glorious stonemasonry suffered at the hands of Oliver Cromwell's men.

On the south wall of the chancel is the finely carved sedilia, originally provided for officiating clergy. At the very top are six saints standing on little men and animals, and crowned with angels. Lower are four female figures, then St Edward the Martyr, with a bishop on either side, and above are - on the left St Peter and, on the right St Nicholas. Further down still are two men on all fours gathering grapes among the foliage, and a pelican in her nest.[5]

'2 miles south-south-west of Newark, is a scattered village and parish pleasantly situated on the River Devon, comprising 227 inhabitants, and 2,150 acres of land, mostly belonging to Robert Holden Esq., of Nuthall Temple. The Duke of Newcastle and Thomas Scales have small estates here, which was soc to Newark, to which this parish adjoins, near the extensive linen manufactory called Hawton's Mills. The church, dedicated to All Saints, is in the early style of English architecture, and contains some ancient monuments of the Molyneaux family, also a few handsome marble ones to the Holdens, whose family vault is here. In 1843 the chancel was thoroughly restored, and a new roof added. The whitewash, which for many years had obscured and disgraced the rich decoration and beautiful carving was taken away. On the south side are three stone stalls, and on the north a lofty arch, having deep and rich mouldings. Beneath is the effigy of a knight in armour. The rectory, valued in the King's books at £17 13s 4d, is in the gift of Charles Newdigate Newdegate Esq. The Rev. Pelly Parker M.A. is the incumbent. The tithes have been commuted for about £750."[6]