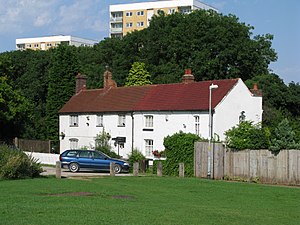 Hawkesley is a suburb of Birmingham, in the part of the city that lies in Worcestershire. It is part of 'The Three Estates', the housing estates Hawkesley, Pool Farm, and Primrose. These are to the south of (and effectively sub-areas of) Kings Norton.

Hawkesley was an important area of action during the Civil War particularly around Hawkesley Farm which is situated further towards Longbridge site of the famous motor works.

Wast Hills Tunnel, on the Worcester and Birmingham Canal, passes beneath the area.

UK artists Gavin Wade and Alec Finlay working with poet Paul Conneally were commissioned to make public art in Hawkesley and as part of the work organised community Renga workshops across the Three Estates making a unique piece that forms part of Wade's huge Strategic Questions piece. The piece being co-funded by the Three Estates New Deal for Communities and Birmingham City Council.

This Worcestershire article is a stub: help to improve Wikishire by building it up.
Retrieved from "https://wikishire.co.uk/w/index.php?title=Hawkesley&oldid=51095"
Categories: